That Time The DJ Compared Me To Kanye 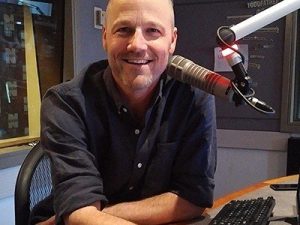 While it’s true that Cumulus Radio’s headquarters are thirty floors above the fabled Madison Square Garden, the radio powerhouse’s offices are still nondescript on a good day, and wholly beige the afternoon I visited last week. I rode the elevator alone, and arrived at an empty, paint-chipped lobby where a Post-It Note lists after hours contact. The place came alive, though, when my pal, 95.5 PLJ DJ Ralphie Aversa, stepped into the room and led me back to his studio to talk about my new album, “Great Lakes.” The guy crackles with enthusiasm. Not that it took me much to get enthusiastic about my new record.

Ralphie Aversa: Mr. Benjamin Wagner, thanks for stopping by!

BW: It’s always my pleasure, Ralphie. Happy to be here.

RA: How long have you been working on this album, Benjamin?

BW: Oh man. A long time. I’ve been making records for a long time, and I decided I was not going to rush. I used to give myself these crazy deadlines. Like, I’d start [recording] in July and say, ‘I’m going to put this out at Thanksgiving!’ With this record I really took my team. So it’s been fits and starts over the last two years from, let’s say the time I first wrote it to the time I dropped that first video a few weeks ago on Facebook.

RA: Why’d you decide to do it in the first place?

BW: Yunno, we’ve known each other a while and I’ve been a singer-songwriter in New York City for pushing twenty years. And I got married and had kids. And doing those two things and holding down a day job is almost mutually exclusive; tough to do it all. But it’s too important to me as a means of expression and figuring my stuff out. And I also wanted to model to my two little girls that what we do as humans is create stuff, make stiff. We make art or we make science, and that that’s a good thing to do with ourselves and our time. So it’s a whole bunch of reasons. I had the songs. They began to burst out of me. I had the time, because my kids were getting old enough. And I was sitting with them showing them songs, and teaching them songs, and playing them to bed every night. A lot of them were written playing them to bed. They’d fall asleep and I’d just sit there in the dark and tinker until it became something. The fourth song, “A Kiss To Build A Dream On,” the last song, “Bigger Than The Moon,” those are songs that I wrote after they’d fallen to sleep playing them to bed.

RA: When you first started writing songs and recording records, is that how you thought it would end up?

BW: There’s nothing about my life at this point that looks anything like what I fantasized about; the things that I fantasized about when I was sixteen are absurd compared to what my actual experience is now. I mean, I’m staring out the window at Midtown Manhattan talking to a successful, big city radio talent like yourself…

RA: Well at least we’re big city, and radio talent. Successful? I appreciate the compliment. The album’s been out for a few weeks now, right?

BW: Yeah. The great thing about making a record nowadays is that once that assets, the tracks, are where you need them to be, it’s a just a question of when you’re going to tell people about it. My plan was to release it on the Summer Solstice. But everything was ready and in place and it was like a Wednesday morning and – again, this is what’s great about being an independent artist – I didn’t have to ask anyone’s permission. I just said to my wife and kids, “Look, I think we’re going to drop the record now.” And I hit a couple of buttons on my laptop while making breakfast and by the time I got to work – true story – I’m in line at the elevator and like eight people are like, “Hey, congratulations on the new record!” And I was like, ‘How ‘bout that.’ And started hyping the show. There are many upsides to these days.

RA: You just had to run it by the in-house A&R…

BW: The only thing I had to run past in-house A&R was the fiduciary responsibility around making the record. The rest is on me. As you know, I’ve been releasing records independently using the internet as backbone for touring or marketing for years so I knew what I wanted to do which is basically get it all ready and then have a bunch of videos in place and really use Facebook and Instagram as a primary means of letting people know about it, and what it’s all about. So I’ve really just started. I’m going to go Live, and posted a(n edited) video every week, and old photos and posters. You see that one of me from high school? Full head of hair likes yours? Shocking stuff.
It’s kind of ok if no one enjoys this record. Because I do.
Yunno, it’s been eight years since I released my last independent album. So it’s good to be back. But it’s not make or break in terms of my sense of who I am, or paying the rent. So as you can imagine that has its own freedom to it. It can be pure. It’s kind of ok if no one enjoys this record. Because I do. And I listened to it on the way here. That oughta be the first most important audience. And my kids sing it to me, and they’re the second most important. It meant a lot to me that you name checked a couple tracks. And I would love for it to move some units. But that doesn’t make or break for me at this point. Which isn’t terribly rock ‘n roll. Or maybe it is. I dunno.

RA: Look at somebody like Kanye West; he’s not terribly concerned with moving units. He just wants to put it out there, and control it. So… the rules are changing!

RA: What was it about these songs that kept you coming back to them over two years?

BW: Songwriting for me… the best thing you can do is turn off the front part of your brain that’s editing you all the time and just kind of strum until an idea comes through wherever and out your mouth and then you hear a phrase that feels like, ‘Oh! That means something, I don’t know what.’ It’s catchy it’s hooky, it’s smart or it’s deep or whatever it is. And you write it down and before you know it there’s something to that. And for me it’s like this puzzle. And the puzzle is like ultimately life itself and the song is a way to unlock that puzzle. What’s it mean? Why am I here? All that stuff. All that big existential stuff. So I think whether or not I was making a record, whether or not I was playing Thursday night, whether or not I would get to talk with you, songwriting is like this means of unlocking this puzzle.

RA: You’re juggling all these different things a lot over a two year period. With so much going on, there has to be something going on with these songs…

RA: How did the song, “Anytime Anywhere” come about?

BW: It started with that rhythm part. And then I just started singing. And the first phrase – I shouldn’t say this out loud into a microphone – but the first phrase [that came to me] was “bus fare.” And I was like, ‘Wha!?!’ But you’re just finding the shape of the sound. And then I just got to “Anytime, Anywhere.” What it came to mean to me is that we’re present to the people we love, whether it’s our friends or our family. And that consistency, presence, reliability… these are the hallmarks, the things that are most meaningfully in our lives. I was kind of singing to my kids or my wife or my friends, “Anytime, anywhere, I’ll be there; I got your back.” It’s a fun one, right? It’s a little punky with crunchy guitars, but it’s pretty poppy.

RA: With a title like “Great Lakes” I wasn’t expecting it!

BW: You were expecting all mariner songs in 3/4!?! That’s why I wanted to take times. I wanted strings, and guitars. I wanted the soundscape – particularly the title track – to sound like it feels to stand on a mountain or swim in the ocean. That kind of epic scope. Like you’re being moved by something physically, viscerally and emotionally.

BW: I’d like to play a good show and feel like the room is vibrating at a different frequency. Beyond that, it would be nice if a piece of video was shared somewhere I wasn’t expecting. After that it begins to be grounded in very simple stuff like receiving an email of “This song really meant something to me, thank you.” I’ve gone from the broad impact of wanting to play stadiums – which would still be lovely; I played to 800 people last week and it was awesome. I’m happy to do big rooms. But it’s also really nice when someone tell you one-to-one that what you’ve made means something to them. So I’ll take It from the large and abstract to the one-to-one and say, a couple of those would be nice.

RA: I like it. Benjamin Wagner, always good to see you.

BW: And you, Ralphie.