Sunny On These Days 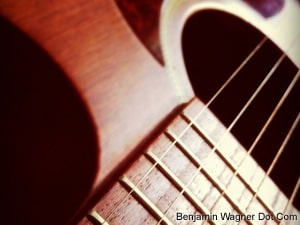 Tonight’s my first rock show in more than a year, and I’m a little bit freaked.

Other than “A Holiday Benefit, Vol. IV” in December (where I performed two Christmas standards), and the “Forever Young” Benefit in October (ten cover songs), my last show was March 2010.

To even call it a rock show is bit of a misnomer: The Backscratch Sessions (Rockwood Music Hall 9p) is nine artists doing three songs each, one of which is a cover of one of the other eight performers. Great idea. Totally psyched. But three songs? Solo acoustic? Not a rock show.

And for better or worse, my guitar (my Martin DX15, that is; my Rickenbacher and Mitchell have been stowed away for years) has spent the better part of the last year in my closet. I’ve hauled it out a few times to play for Maggie, and she loves it, stares wide-eyed, and bangs on the strings, body and tuning mechanism. But the fact is, it’s impossible to really play with her around. And sadly, much of the motivation is gone.

But it’s sunny on these days. I count my blessing, and cultivate a healthy sense of paranoia, but I won’t lie: I’m happy — ecstatic even — in this family of mine. Life is not easy, but it really is deep and simple.

And so approaching even two of my 130 or so songs from my 15 solo EPs and LPs is difficult; most of it doesn’t resonate, or make sense at this point in my life.

Plus, I don’t remember most of it. I had to browse my iTunes catalogue to remember my own song titles. No wonder Michael Stipe uses a teleprompter.

Luckily, I get to lean on someone else’s song. It’s supposed to be a surprise, but I’ll tell you this much: I know her, and it’s a great song.

Not that I’m not going to alter it until it’s nearly unrecognizable; I am. I’m making it heartbreaking, confusing, and depressing by slowing it down, deleting full lines and adding new ones. Still, I think she’ll like it. I do.

Fact is, I’m coming out of retirement tonight, and it can go one of two ways. Maybe I’ll make more time for songwriting, and try to find a way to write songs from the perspective of a 40-year-old that isn’t lame. Or maybe my guitar’ll go back in the closet and pop out a few times a year. Or maybe both. Difficult to say.

My twenty-year music career (from Neoteric Youth to Smokey Junglefrog to Benjamin Wagner Deluxe to… this) led to Abbi and which led to Maggie and the invention of everything else all of which means way, way, WAY more than any record deal or Grammy Award ever could.

And I’ll end like I always do, with the prettiest, most-plaintive and moving version of “Dear Elizabeth” I can muster. Because some twenty-five years after my first rock show (1987 Conestoga High School Talent Show), I still have something to say.