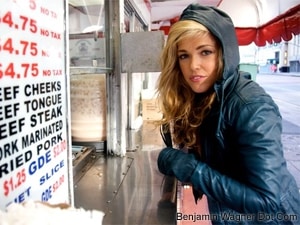 Of course, Rockwood’s been my home turf since founder Ken Rockwood (the Professor half of one-time Bar/None recording artists, Professor & Maryann) first swiched on the PA in 2005. The room’s knows for Ken’s careful curation, fierce intimacy, excellent sound, and well-considered wine list. Amongst performers, it’s know as one of very few places in the city where you’re not treated like lunch meat.

As a result, the place is brimming with bona fide talent, folks who’ve parlayed Rockwood’s stage for other and larger ones, but always returned like spawning salmon. Folks like Amber Rubarth, Ingrid Michaelson, Ian Axel and Bess Rogers. And folks like Rachel Platten.

Rachel’s voice is sweet, clean and pure — like Kate Bush and Tori Amos with a dash of Swedish synth-pop. Her songs are fundamentally Millennial: well-realized, self-aware, optimistic and laced with big beats and tiny blips. Her new album, “Be Here,” topped iTunes when it was release last month.

Couldn’t have happened to a better person.

BW: Tell me about the album’s title, “Be Here.” Very Zen.

RP: Yes indeed. It’s a little reminder to myself to be present, to be in the moment, and be conscious and grateful for all that transpires. The lyrics on this record all resonate with this idea so it seemed like a good overarching “pull it altogether” theme for the album.

RP: Melody first almost always… I wait until the last possible moment to bring it to my keyboard or guitar, because I feel then you become limited by what you hear. When it’s in your head it’s still unformed and can go anywhere. Lyrics last. Once in a while I try to mimic some Rhazel beat (from the Roots) and then a beat will lead me first… but usually melody.

BW: I find you AND your music remarkably up, optimistic, bright, bubbly. How do you pull it off amidst the noise, choise, and general cynicism of New York City?

RP: I don’t know that I pull it off..I mean…. I do try though! First of all, I’m rarely in New York City these days, so maybe being on the road and traveling helps. But, I work very hard at being optimistic, I do a lot of yoga, meditate a lot, and try to constantly remind myself to be grateful for all of this. We are so blessed to be living the way we do, in the time we do. The fact that I get to make music and bring it to people is just incredible to me. I truly feel so lucky and I’m so glad it comes off in the music.

BW: Bono’s got a great lyric (based on the philosopher, Pascal), about “Looking for to fill that God-shaped hole.” It speaks to that existential thing that’s missing in most of us, and what how we seek to fill it. What’s yours?

RP: Oh man, what a question. I seek and sometimes find spirituality in music, in yoga, in meditation, in good conversations, in laughter, in being on the road. I find it especially in Touring these days. I of course feel that emptiness sometimes too, but that is just the ego, trying to make noise so it can get our attention. When I hear my mind getting very loud and mean to me, I try to shake myself out of it. I am also a self help book junkie. So lame, I know ;) I especially love Eckhart Tolle’s Power of Now and Julia Cameron’s the Artist’s Way. These are my little bibles.

BW: You worked with some huge producers on this record. What did they bring to your songs?

RP: I think that at it’s best, the record sounds “big”….and that was my aim. I wanted not just a hip sound or a trendy stylized sound but one that was instantly universally appealing so that people could appreciate it across age, gender, ethnic lines. It was ambitious, and I think that working with these guys helped me get closer to achieving that.

BW: What with your YouTube duets with Nick Howard, and Martin Rivas, and your gorgeous duet with Alex Wong for our “Holiday Benefit, Vol. 4,” you’re quite the collaborator. Who’s next? Who’s your dream?

RP: My dream collaborator is Jack White. I love that man, the way he plays, the way he writes, he’s just in the purest sense of the term, a rock star. I also am a big fan of a producer I met recently Kevin Agounas who has produced for Edward Sharpe, Cold War Kids and some other peeps I respect a lot. I hope to get to work with him on a project sometime.

RP: Oh man, this year has been such a dream come true. I’ve been on the road pretty much nonstop since last April, and we’ve seen and experienced so much, it’s such a hard thing to take out one experience from the bunch. But I can tell you that we are in Buffalo right now for a couple of shows up here and we went to see Niagara Falls today. Holy crap, I felt so small… have you seen that yet? It’s so beautiful and inspiring. We now have a goal to check all the rest of the 6 wonders off our bucket list.

RP: “Anchorman” is my number one favorite. “What? You pooped in the refrigerator? And you ate the whole… wheel of cheese? How’d you do that? Heck, I’m not even mad; that’s amazing.”

BW: There’s an elephant on your album cover and in some random press pics. What’s with that?

RP: When I was little my parents asked me what I wanted to be when I grew up and I said “I want to travel to Africa to save the elephants.” I said this for years until my teacher told me it wasn’t a viable career (I still don’t forgive her).
Anyway, I’m also very into yoga and have read a lot about Buddhism to dive deeper into my practice. I found out one of the most revered God’s is Ganesh (a man with an elephant head), lord of success and destroyer of obstacles. Powerful shit! I dug the idea and thought it was an excellent logo given my early obsession with elephants. So there ya go.

Rachel’s hitting the road with Bess Rogers this summer. Do yourself a favor: be there; the stages are only getting bigger.