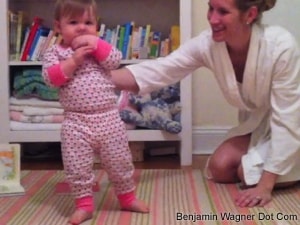 Maggie took her first, tentative steps last week, slowly, deliberately and clumsily wobbling across the bedroom from her startled mother to her amazed father.

She waved like a homecoming queen to steady herself, then collapsed on her bottom.

Abbi and I were flabbergasted. Maggie was nonplussed. Still, it was a colossal milestone for all of us.

Henry David Thoreau wrote, “I seek to stand on the meeting of two eternities, the past and future… is precisely the present moment.” The passage rocked my world when I read it in college. Thoreau simply and eloquently identified a tension I’d felt for years; stuck between looking eagerly forward, and nostalgically back, while missing the moment.

Parenthood is riddled with this paradox. Abbi and I tiptoe into Maggie’s room every morning as if it was Christmas. Maggie is always smiles and giggles and gasps. I never want it to end.

Invariably, though, I find myself a watching the clock just a half-hour later, counting the minutes until breakfast in her highchair rapidly and drastically diminishes my anxiety that she’s going to face plant into her toy box and be scarred forever.

Moments later, I sit in my office stealing glimpses of the adorable and plentiful photos surrounding my desk, missing her.

Maggie’s made The End real. I’m nearly 40-years-old. Time is actually running out. Yet here I am sitting behind a desk for twelve hours a day to earn enough money to hire someone to be with my most treasured, most-loved. It’s confounding.

And it’s not just existential or philosophical, it’s literal.

Last week, my years of lower back, ischial tuberosity (aka butt) and hamstring pain — all those marathons, I assumed — was diagnosed as a minor congenital defect to the curvature of my spine that — compounded by fifteen years of self-directed marathon and triathlon training — had led to a partially-herniated disc (L4/5, if you’re curious).

That slight bulge has put strain on my spinal cord manifesting in persistent, rogue neuroimpulses down my legs. In other words, my back is telling my legs to flex all day (and night) long.

And so, this morning I got a shot of cortisone to confirm the diagnosis. Next week, I’ll commence another round of physical therapy to strengthen my core and improve my gate and stride.

And here I would have expected to be settled, safe, comfortable, and contented by now.

When I was younger, I always figured I would eventually arrive at something or somewhere. As if life was a plateau, not a series of sign waves. I thought that — at some point, with enough experience, writing, research, exercise and growth — I would figure it out. I’d be strong. I’d be done. I’d be good.

I developed this sentiment despite all sorts of signs to the contrary.

The Innocence Mission was in heavy rotation in my Syracuse University-era playlist. Especially the song “Beginning The World.” And not just because frontwoman Karen Peris had written my birthday into her lyrics (“Aren’t your bursting with butterflies / On the fourth of September”). “Beginning The World” was my life: stops, starts, reboots and re-imaginings. I was always figuring the same thing out for the second and third and fourth time.

My brother, Christofer, cousin, Andrew, and I attempted to climb Giant Mountain a few weeks after graduation. It was an arduous hike, and we were woefully unprepared.

“Are we there yet?” Andrew asked.

“We are always almost there,” I answered.

A few months later, I used the phrase as the title of my first solo album. And yet it didn’t sink in.

That fall, I drove cross-country, listening to Matthew Sweet’s cover of Victoria Williams’ “This Moment” like an auto-reverse mantra. “This moment will never come again / I know this because it has never been before.” I covered that cover for years. And yet it still didn’t sink in.

Twenty years later, I am knee deep in the new Foo Fighters’ record stuck on a thematically-familiar lyric.