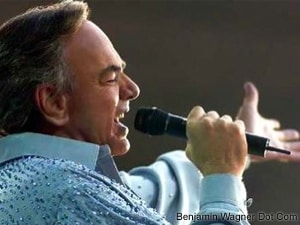 I was way out on the edge of The Bronx when the ominous sound of cellos rose in my headphones.

The New York City skyline was like Oz in the razor-wire distance, miles beyond the massive, concrete Bruckner Expressway, past fields of industrial oil storage tanks, rows of rusted railroad tracks and blocks and blocks of empty warehouses. The street was salt-bleached, windswept, and empty, save a lone security guard on smoke break. Bowery Bay shimmered in the pale, late-winter sun.

A church bell peeled three times as the strings swept upwards and held a measure, finally yielding to the steady gallop of a classic rock set up: guitar (nothing but downstroke), bass (steady on the root), and drums (all toms, no snare).

“Far! We’ve been travelling far,” that distinct outer borough baritone bellowed in my ear. “Without a home, but not without a star.”

“America” is neither Neil Diamond’s finest recording nor best song. Despite authentically heartfelt platitudes of “Solitary Man,” “Hello Again,” and “Love On The Rocks,” though, it may be his most-personal and most-universal all at once. It’s certainly his most-rousing.

“We huddle close,” this second-generation, 20th Century Man sings in ernest baritone. “Hang on to a dream.”

The 70-year-old singer, songwriter, actor, producer, and King of All Sequins will be welcomes into The Rock & Roll Hall of Fame at tonight’s The 26th Annual Induction Ceremony, and for good reason; he is as much a crucial swatch of fabric in the Great American Quilt as he is wrapped up in it. What’s more, he is the quintessential songwriter, who — with deep hooks, memorable melody and introspective yet universal lyrics — sings of what rock writer David Wild describes as “a deep sense of isolation and an equal desire for connection.” What could be more American?

Neil Leslie Diamond’s parents, Akeeba and Rose, were descended from Russian and Polish immigrants. His father was a dry-goods merchant in Brooklyn. Diamond took up guitar after seeing Pete Seeger perform at summer camp he was attending as a teenager. He graduated from Abraham Lincoln High School, and enrolled at NYU. A chance encounter with the Brill Building songwriting team of Jeff Barry and Ellie Greenwich led to a contract with Bang Records. In 1966 he recorded his first album, featuring hit singles such as “Solitary Man” and “Cherry, Cherry.” Shortly thereafter The Monkees recorded several of his songs, including the 1967 megahit, “I’m a Believer.”

In his forty plus year career, Diamond has released thirty lps (not including compilations or live albums, most notably his seminal “Hot August Night”), and delivered 37 top forty hits. Despite selling some 115 million records sold worldwide — including 48 million of which in the U.S. where he is the third most successful Adult Contemporary artist ever behind only Barbra Streisand and Elton John — Diamond is typically thought of as uncool, easy-listening, elevator music. True, his signature hip-shaking, sequin-laden swoon fests haven’t helped. Nor, for that matter, did his string of duets with Streisand.

Oddly enough, though, that’s when I met him. His late-seventies LPs, “You Don’t Bring Me Flowers” and “September Morn,” were in heavy rotation on my parent’ faux-wood Magnavox hi-fi system. Diamond’s five-times platinum “The Jazz Singer” was one of just a few headphone escapes as the sturm und drang of my parent’s divorce swirled around me, . Those swollen string sections, buoyant melodies and dramatic, emphatic growls were welcome relief. Years later, well prior to becoming a New Yorker myself, my mother dragged me to see him at Madison Square Garden. I was a teenager, so complained the whole time. But more than just singing along under my breath, I wanted to be him there in the center, there in those sequins, splashed in the spotlight.

Still, pop culture is relentless. It moves fast, and it moves on. And it leaves cruel simplifications in its wake. But reducing Diamond to sequins, spotlights, and “Heartlight” (his 1982 pean to “ET: The Extra Terrestrial”) misses the point. Through reinvention (“Headed for the Future”) after reinvention (“12 Songs”), and rediscovery (Urge Overkill’s “Girl You’ll Be A Woman Soon”) after rediscovery (the Red Sox’s seventh inning stretch), Diamond is, at his core, the consummate singer/songwriter. He is a man and his guitar. He is a well-worn voice. He is a traveling salvation show. He is the sound of America alone with its star-sequined dreams.

This post originally appeared on Brian Ives’ No Expiration Blog.