When A Moment Changes Everything 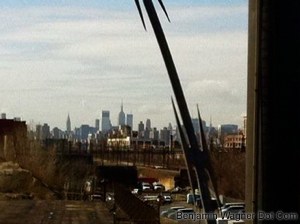 For weeks now, I’ve been listening to David Gray’s “When A Moment Changes Everything” on near-repeat fully expecting to get hit by a bus, pushed in front of a subway, or catch a stray bullet at any instant.

“The stolen glances broken threads,” he sings. “The vision looming in our heads. The years spent running parallel to everything that might have been.”

Of course, nothing major has happened in the intervening weeks — nothing perceptible, anyway. The impossibility of measuring cause/affect is, of course, that everything is causal.

I was nearly six miles into my weekly long run Saturday, deep into The Bronx east of the Bruckner Expressway just a few blocks from the bay. I’d wanted to snap some evidence of this unknown, industrial New York for miles, but the hulking oil depots and fort-like recycling centers were well-festooned with signage prohibiting photography. Pushing further north still, I spotted a bridge over the railroad tracks, and slowed to debate its crossing; I could scarcely see across it, and wasn’t sure where it led.

I pushed across, and began descending a long, salt-bleached avenue towards a narrow sliver of chain-linked bay front with a glistening view of Riker’s Island. As I drew closer, I made out a lone security guard pacing in front of a refinery gate, dashing my hopes to snap a photo and generally ratcheting up my paranoia. I turned down my iPod, waved, and said hi.

“Lemme axe you something,” he said in his finest Bronx brogue. “How long you been running?”

The guy was short and round and rabidly consuming his cigarette. I grew self-conscious of my black tights.

“Well, I’m almost forty,” I said (jumping the gun six months, but trying it on for size). “I imagine I’ve been running for fifteen years or so… since I was twenty-five.”

“Man,” he said looking down at his cigarette, “I’ve been tryin’ to quit these things for years.”

“Yunno, I used to drink and drug but kicked that. Now I been thinkin’ I should start runnin’ maybe help get off these things.”

We talked a while, me stretching, him pacing. I told him that I remembered feeling like I had an anvil on my chest back when I smoked, and how that had lifted, and then encouraged him to sign up for a short, local race six months out and set a goal. The entire conversation was under two minutes. I never broke a sweat. And I never snapped a photo.

But as I jogged back up towards that bridge, the song came on, and I thought of something Mister Rogers always said: “There is something of yourself that you leave at every meeting with another person.”

Who knows what moment changes everything, or anything at all. Maybe we can’t ever know. But what if they all do, and we make choices accordingly? Then what?