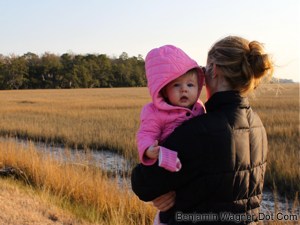 It’s clear to me now that my expectations were wildly outsized.

Our Christmas Eve flight from LaGuardia to Charleston unspooled mostly-unceremoniously. When Maggie wasn’t sleeping, she was gazing out the window awestruck. It was actually pretty cool.

And when we landed, The Kellers we’re waiting, car seat at the ready. Maggie was asleep before we left the city limits, and stayed that way well into the Low Country.

Trouble didn’t begin to arise until Christmas morning. Of course, Maggie was the first to wake. Slowly her grandparents, aunts and uncles began trickling from their respective rooms. By the time everyone was ready to open gifts, Maggie was ready for a nap.

Now, Dear Reader, up til now, Maggie’s only been away from home a few nights. And she’s only slept in her crib at night. She takes morning and afternoon naps in her swing — the swing that was 1000 miles north of Brays Island, South Carolina.

And so it was some four hours into Christmas morning with the Keller, Family waiting in the living room below, that we endeavored to break Maggie of her swing habit, while — what the heck, go for broke — beginning sleep training (or COI, the process in which a baby learns to sooth itself through gradually diminished parental soothing).

For two hours we tried to get her down. Her screams echoed through the sparsely-furnished garage apartment like a wounded badger in a trap. It was heartbreaking.

After Christmas dinner, the same: Abbi and I alternated soothing Maggie through her hourly wake-up calls until — somewhere around 430 — Abbi popped a boob (her expression), tucked a pacifier in her mouth, and send her deep into dream time.

The rest of the week was the same: Maggie was unpredictable, inconsistent, and irritable (punctuated, of course, by adorable, incredible, and awesome). By and large, she refused to nap. On Tuesday evening, Abbi and I drove around Brays for an hour. On Wednesday afternoon, I sat perfectly still in an easy chair for forty-five minutes as she slept on my shoulder. Evening was worse, the baby monitor looming over our shoulder at all times, threatening to issue it tiny, distorted report at any moment. Which it did almost hourly. Abbi and I alternated running upstairs to soothe her, sometimes for a few minutes, sometimes for hours at a time. And nighttime was a nightmare, rocked from zombie-like sleep to settle our screaming, disoriented daughter.

By Thursday, when we’d scarcely left our cave-like apartment, it occurred to me that a vacation with an infant is less vacationy — a revelation I Tweeted. My colleague (and father of two) Jeff replied, “It isn’t a vacation at all with kids.”

Which is not to say that we were left to our own devices, or bereft of immensely joyful moments. The Kellers provided terrific daytime support, even affording Abbi and me a free afternoon for lunch, and an excursion to the massive live oak under which we were wed.

We relished Maggie’s first, wide-eyed Christmas morning, her awe-filled first swim, and dozens of tiny, inspiring moments in between (as a new parent, even feeding is a revelation). Maggie is growing at breakneck speeds. Every day brings something new — new sounds, movements and expressions — each one a revelation. And even in the middle of the night, in the deepest depths of exhaustion and despair, there is immense pleasure in the tiny, gentle sigh that comes with her finally giving in to sleep.

And if she could teach me all that at seven months, I expect to be a genius by the time she’s seventeen.