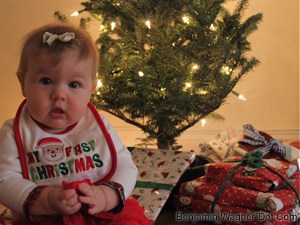 Unlike other things stretched to the point of stereotype, though, the scale and scope of these new feelings are so huge, this new love so massive and revelatory at every turn, that its very triteness is completely superfluous.

Especially Christmas, that most-commodified, angst-ridden celebration of all.

You, Dear Reader, may recall my tragic history with the holiday. It was, for logical, reasonable and defensible reason (I’m sure) the day my then recently-divorced parents decided to first exchange custody of my brother and me in a pale, gray, wind-whipped gas station parking lot in Clinton, Iowa.

For years, that mostly-silent custody battle wrecked havock on all of our Christmasses. Take 1993. Chris and I spent it along in silent protest holed-up in our icey-cold, $376-dollar-rent apartment in Saratoga Springs, New York, gorging ourselves on deli turkey, cold Stove Top, and bong hits.

In my late-twenties, as it dawned on me that this seasonal baggage combined with seasonal affective disorder (as in, actual short days and dark nights) was fast approaching diminishing returns, I began take the holiday back. It began with modest, solo-acoustic “Winter Solstice” shows, grew to include annual holiday singles, and then became “A Holiday Benefit.” And all the planning, recording, and performing did me some good. I didn’t need then sun; the light burned within.

Of course, I grew up along the way, and made relative peace with the whole thing as well. And then I went and got married. And then we had Maggie.

Suddenly, it all makes sense.

The beauty of parenthood, it seems, is the fresh set of eyes. This year, our Charlie Brown Christmas tree may well adorn The Met lobby. This year, our ragged set of whit lights may well go The Full Griswold. This year, Abbi’s best “Silent Night” may well trump The Mormon Tabernacle.

Of course, it’s not about those things, though, it’s about the spirit of the thing.

Finally, at 39-years-old, I have some sense of what my parents were working with, and against. Finally, thirty-years-later, most of the sadness is gone, what’s left behind grown weightless. The empty space is filled by this enormous love for Maggie. And through that love, I can begin to appreciate why they wanted so badly to be with us; I know what it feels like now. It feels like chubby cheeks, bare bottoms, wide eyes and fresh giggles all at once, backlit by candlelight, and with a whiff of pine needles.

For the better part of my life, I’ve endeavored to find some sense of home. It’s chronicled in my fifteen records, most aptly in my 2003 LP, “Almost Home.”

Eight years later, I think I’ve finally arrived. More succinctly, I’ve built a new home with Abbi and Maggie. The drywall is fresh, the paint barely dry. But it’s ours, and its sturdy.

Because those foundations — the bright-eyed one-year-old tearing through wrapping paper, the dewey-eyed ten-year-old in that cherry red Gran Torino, the bleary-eyed, Stove Top-eating post-grad — are crucial, and they’re present, and they made me the man that I am: Abbi’s husband, and Maggie’s dad. Neither of whom could be more excited for Christmas.