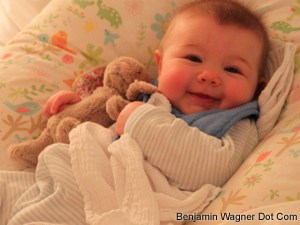 At his own wedding, Casey nailed “All My Loving.” At my wedding (where the purvasive rumor was that he was John Lennon’s Lost Son), he crushed “Twist & Shout.”

Heck, one listen to his instant-classic “In Search of Seas,” and you know this guy worships at the alter of Lennon & McCartney (with an emphasis, clearly, on Lennon).

And have you seen him lately?

Just as recording “Golden Slumbers” with him was obvious, asking for his help was difficult. I imagined he’d wonder, Why rebuild the Parthenon? Why repaint the Mona Lisa? Why cover “Golden Slumbers?”

Still, it was the song that started the whole project. Growing up, the record player (or “hi-fi”) was in the basement. And the basement rug was littered with Beatles albums. “Golden Slumbers” was a natural; it had all the elements: a longing for home, a languid melancholy, and a peerless melody. I sang it for Maggie when she was just a bump in Abbi’s abdoman — long before I knew she was Maggie.

And so I asked. And explained that it was for my future progeny, and that proceeds would benefit children’s media research and advocacy. And he said yes without pause.

The next big thing was deciding whether or not to add an extra chorus. Ends up “Golden Slumbers” was one of dozens of half-baked song fragments the band sewed together for side two of “Abbey Roady.” So it’s short: just two verses and one chorus.

In the studio, though, pianist (and singer/songwriter extraordinaire) Misty Boyce and I had a brief debate.

“Won’t the purists decry my meddling?” I asked.

I tracked the vocals months later in my bedroom, struggling to find the right timber. Like much of “Forever Young,” the melody is at the edge of my range. The subject matter and lullabye aesthetic, though, forced me to find those notes gently.

I sent the rough mixes to Casey in Brooklyn, and cellist Patrick Riley in Des Moines.

When their respective parts came back, I was shocked by their gentle beauty. Casey’s three-part harmonies (whipped off in a few minutes, no doubt) sounded like the breath of angels. And Patrick provided the billowing clouds below.

Taken together, it’s breathtakingly beautiful. When I play it for Maggie, she never fails to fall silent and stare into the speakers, awed. And then her eyelids flutter, and she slips gently into sleep.