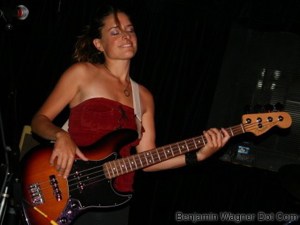 I’d been angling to collaborate with Raining Jane’s Mai Bloomfield for nearly three years. It took me that long to find the right song.

I first met Mai in 2008. Raining Jane was opening for The Nadas in Des Moines. I was opening for both. The ladies knocked my socks off with their three-part harmony. But it was at the following night’s late-night, bandmate-swapping show that I was truly smitten.

Mai, Raining Jane drummer Mona Tavakoli, bassist Becky Gebhardt, and Nada frontman Jason Walsmith joined me for an impromptu performance of “Dear Elizabeth” that — after nearly ten years of playing the song — gave ME goosebumps. Mai improvised a cello part within two measures, then a sweeping solo. Sure, it was late and there was drink involved, but — with Mai’s beautiful soprano at my back, the final chorus was breathtaking. I resolved then and there to record with her.

Over the years, we became pen pals. Her dispatches from the road were always enthusiastic, never jaded. Her “Wyoming Sky” became a headphone traveling companion. I never missed a show when she rolled through town. I snapped up her EP, “Eclipse,” the moment it hit CDBaby. In person, via email, and on CD, Mai never failed to make me smile, to capture in song and spirit what’s best about being alive. And so, as I considered duets for “Forever Young,” Mai was at the top of my list.

We bandied around potential songs for weeks, considering “Northern Sky” (among others) before arriving at the James Taylor and Carol King chestnut; the original duo’s East and West Coast sensibilities suited me, as did the song’s simple message (if not for my daughter, then for Mai). Trick was, “You’ve Got A Friend” is a piano-based song. And I’m neither a pianist, nor guitarist enough to transpose for six strings. Enter Chris LoPresto.

I asked Chris to come up with something mellow, something beautiful, something a little bit sad. He reported later that — once he figured out the approach — he bagged it on one pass. His sparse, patient re-imagining of the song left plenty of room for Mai and my voices, and — perhaps as importantly — her cello. When I shipped off the raw files (one piano, one vocal), I couldn’t have dreamed she ship back such a work of absolute beauty.

From 3000 miles away, with no direction at all, Mai delivered a gentle, subtle, heartbreakingly-sweet harmony. With zero guidance, she helped make “You’ve Got A Friend” one of the most-beautiful recordings of my career. Her performance is not simply pitch-perfect, but sentiment-perfect. In her plaintive cello and soft harmonies, she elevates the entire song. It’s a 4:33, though, that she delivers the coup de grâce: the gently-sustained “friend.” In that instant, she is a strong though nearly-silent reminder that — through it all and across the miles — we have each other, and that’s all we need.