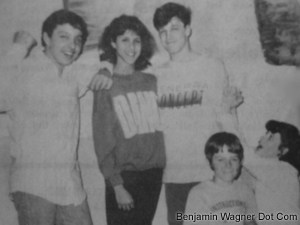 In seventh grade, Mrs. Culp kicked me out of her music class. That she should find me twenty-five years later to tell me that she’s “impressed beyond words” with my new benefit CD, “Forever Young,” then, is sweet relief — and my best review ever.

Mrs. Culp’s junior high music class was a south-facing, high-ceilinged, soundproofed-wall affair flooded with sunlight. A student-painted mural of musical staff, notes and instruments was splashed across the beige walls like a Technicolor wave. Mrs. Culp stood before us, a cross between Katharine and Audrey Hepburn: firm, but loving.

Though we could sing well enough, and figured out the recorder and acoustic guitar in quick succession, Skip Cooley and I had a tendency to drive Mrs. Cult to distraction with our chatter and giggles (made worse, I suppose, by our relentless flirtation with the fairer seventh graders).

“We’re trying to figure out how to harmonize,” I improvised.

Mrs. Culp paused the song and said, “You may do so outside. You have five minutes. When you’re done, you may share with the rest of the class.”

Skip and I walked outside, heads hung low, then leaned against the cinder block walls and began. We didn’t know what we were doing, so sounded out two seemingly different, seemingly complimentary parts to the same song: “You Are My Sunshine.” Moments later, she called us back in front of the classroom where we surprised everyone — excepting her, I’m betting — with our version of the song.

Two years later, Mrs. Culp would select me as Frederick, the lead in Gilbert & Sullivan’s “Pirates of Penzance.” Two standing-ovations later, I was hooked. When I handed Mrs. Culp a bouquet of roses, she beamed. When I was caught on tape as the sole dissenter during a wrap party food fight (it wasn’t just that I found my cast mate’s pie-tossing cake-smearing behavior juvenile, I immediately empathized with the janitorial staff — and wanted to protect my brand-new Generra shirt and Jimmy-Z shorts), she heaped high “leadership” praise on me in front of all of them. A few days later, Mrs. Culp sent a thoughtful, hand-written note that I retain to this day.

Until this week, I hadn’t heard from Mrs. Culp since she attended the Philadelphia stop on my 2002 “Almost Home” tour. She emailed to say hi, saying, “I’m truly anxious to hear of your work, performances, committment to music and the arts. You have a great talent and I hope the world has been recognizing same.” I sent her a copy of “Forever Young,” and a note about Abbi, Maggie, MTV News, “Mister Rogers & Me,” and everything else. On Thursday, she wrote back.

I have listened to the CD MANY times! Your interpretations are musically intriguing and suited to the lyrics. Your style is smooth, intimate, relaxing, lyrical and almost dreamy at times. I am impressed beyond words with your talents! Your duet partners make a good pairing with great harmonies.

I invited our neighbor’s children (five-year-old boy, three-year-old girl) to listen to “Forever Young.” The boy often tells me he likes music and sometimes asks me to teach him a song (and I do this every time!).

First, they both absolutely loved “Rainbow Connection” and wanted to hear it again, immediately! Your spirited rendition of “Forever Young” had them moving bodies and feet around the room. We clapped and tapped during “Mr. Tambourine Man.” I sang harmony with you on “You Are My Sunshine” … they both want to learn the song! I sang along with you on “You’ve Got A Friend” and they enjoyed this, too! Your performance of “Golden Slumbers” was beautiful. We all sat in silence and listened!

Now, my reaction/thoughts on “Amazing Grace” . . . your performance touched me deeply, moving me to tears. The range of this song is perfect for your voice … talk about being impressed. Phew!!!

Thanks, Mrs. Culp. For the harmonies, and for everything.