You Are My Sunshine: Benjamin Wagner’s “Forever Young” LP Track-By-Track 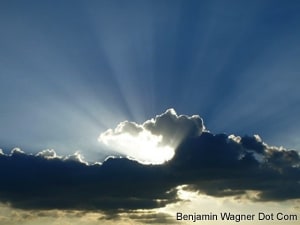 Years ago now, I was in a country cover band called The Smith Family. Almost Home producer Kevin Anthony had tired of of his techno outfit, Electroland, so formed the band with a nod to his Galveston, TX, country roots. I eagerly signed on.

Kevin and I split front man duties evenly, though I enthusiastically saught out the mic for the rockers: “Honky Tonk Blues,” “Whiskey River,” “Wine Me Up.” And “You Are My Sunshine.”

See, The Smith Family closed most shows with a rousin’, rockin’, sing-a-long version of “Sunshine.” And why not? Everyone knows the tune and — a few PBRs in — is happy to join in. Most night, I was happy to stand on a table top to boot. (And many night, I ended up hailing a can as the sun rose over Brooklyn.)

Fast forward five years. I’m sketching a set list for my first all-ages, afternoon show, and I wonder, ‘What kids’ songs do I know?’ Subtract the PBR, toss in a round of solos, and we were onto something.

Cue “Forever Young.” The sing-a-long sensibility was a fit, but not our rollickin’ version; it was way too rockin’ to lull my someday-baby to sleep. Ends up, in the weeks and months prior to Maggie’s birth, everything had changed. I’d almost stopped strumming completely. I was nearly whispering when I sang. All inadvertently.

And so, as I drafted my “Forever Young” track list, I decided to put this new-found approach to work. Trouble is, I couldn’t get a decent guitar recording. Night after night I tried to nail the arpeggiation to no avail. And so, when I had my dear friend Jeff Jacobson over to track “Sweet Baby James” vocals, I called in a favor. He delivered on the second take, complete with my one musical variation: I added a chromatic in the chorus (listen for it on the lyric “away”).

CueThe Nadas’ Jason Walsmith. Jason and I’d been discussing a collaboration (another, really; Jason’s all over my 2005 LP, “Heartland”) for years. Ends up, he’d been meaning to make a children’s record, and loves “You Are My Sunshine.” And so it came to pass that Nadas’ bassist (and “Forever Young” producer) Jon Locker tracked Jason and Nadas’ violinist Becca Smith in his Des Moines studio one August afternoon. Jason and Becca’s vocals float over Jeff’s gently-arpeggiated guitar like billowing clouds. Beautiful. What’s more, Becca’s violin swoop and soar like lazy-summer fireflies. Gorgeous.

And so it is that a one-time drunken sing-a-long became a lullabye for my darling daughter with the simple passage of time, and the help of some dear friends. Funny how things change, indeed.

Listen for yourself, please. It’s for charity!