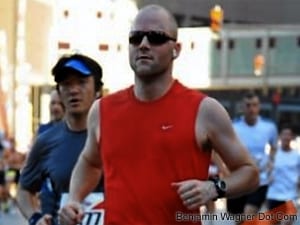 “It’s not the heat,” I Tweeted in the wee hours of Sunday morning, “It’s the uncertainty.”

Ends up it was both.

See, Chicago has a bit of history with extreme weather. In 2007, one runner died and another 100+ were rushed to area hospitals on account of too much heat (the mercury topped ninety!), and too little water.

That Sunday’s forecast, then, called for a high of 86 degrees was, well, cold comfort (or it’s conceptual but not thermal inverse).

Still, as Chris, Mike and I sat around Saturday afternoon (one isn’t really a tourist on a marathon weekend like this; you don’t wanna’ blow energy on siteseeing), it wasn’t the forecast that had me flumuxed. It was the thousand upon thousands of variables: rogue muscle cramps, ankle-splaying potholes, early peak, bad salmon, and on and on and on…

Sunday morning came quickly. Queuing was remarkably relaxed (in contrast to mustering some three hours prior to the NYC Marathon). I was in a seeded start up front on account of last year’s 3:51:46. I stretched and fidgeted, staring straight ahead to the once-familiar Standard Oil Building.

True, I was in a seeded coral (that is, a section of the start populated by runners with competitive times).

Still, when the gun went off (well, there was no gun, just some guy announcing “The 2010 Chicago Marathon is under way!”), I was startled at how quickly runners popped into fifth gear. Everyone around me was cooking, while I kept reminding myself, ‘26.2 miles, 26.2 miles…’

The course zig-zags through downtown, then north towards Lincoln Park and The Gold Coast. I was unsettled the whole way, my synapses firing at every undertainty in my brain: distance, dehydration, aches and pains.

The scenery, though, was spectacular. The sky was a cloudless, incandescent blue, Lake Michigan sparkling beneath. Every corner revealed a distant childhood memory (My family lived in nearby Oak Park from 1977-1981).

Still, I felt frenzied and anxious, even more so when — somewhere prior to the half-way mark — goosebumps rippled down my arms like a gently breeze. Or was it actually a gentle breeze?

Though for previous matathons I’ve only stopped periodically for water, I’d been doubling-down on hydration the whole route: Gatorade and water. Still, dehydration was knocking. And though the midway mark — The Sears Tower, a beacon of my childhood — provided a moment of inspiration and levity (The Verve’s “Lucky Man” helped), and I was on pace for a sub-four finish, I was getting worried.

All the while, the spectre of Chinatown loomed large. Though my cousin Andy pledged to cheer for us there, he characterized it as a concret ghost town. Combined with burgeoning exhaustion, dehydration, disorientation, and a rapidly depleated playlist…

Sure enough, Chinatown was drab, shuttered, and sparsley populated with spectators. Twenty miles in, I’d blown though nearly every trick in my bag: three-gels, two Advil, and a stick of Trident gum. All that was left was my beloved, last-ditch gummy bears which I choked down just a few sun-bleached blocks from Comisky Field. Comisky Field! How did we make it to Comisky Field!?!

My memory of those last six miles is, as expected, fuzzy. There were moments in the hinterland-borders of downtown where I didn’t know where I was, or when it would end. When we finally turned north, and the skyscrapers re-aligned before me, I was reoriented. But the sun was crippling, a near white-out despite my sunglasses. I’d taken to pouring water over my head, and onto my arms. I was struggling to keep pace, constantly calculating my sub-four odds despite diminished mental faculties. My iPod headphones finally fizzled out on account of waterlog. I bit my tongue to drive a last spark of adrenaline, and tuned into the roar of the crowd. After one-last, painful uphill, I turned left into Grant Park, and began the slow, gentle descent towards the finish line, leaping to tap the banner as I crossed.

In the moments that followed, I looked up to those skyscrapers I grew up loving so much. And I looked up at the sky, so blue, so full of sunshine. And I smiled, And stumbled northward to my hotel grinning at all that I had endured — all the heat, and all the uncertainty — in these short four hours before most of the world had even finished their morning paper. And I quietly muttering under my breath half-comment, half-question, “Next?”