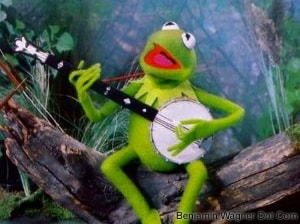 Though “The Muppet Movie” was released in June, 1979, I didn’t see it until hit cable the following winter.

My parents had just separated. My father was living alone in “our” old house while my mother, brother and I lived across town.

Chris and my model airplane-strewn bedroom was barren, so my father purchased matching futons from JCPenny and put them in the otherwise sparsely-furnished tv room. It was there that I first heard “Rainbow Connection.”

Whether its the context or the song itself, I’m not sure, but — as with the bulk of my generation, I imagine (Kenny Ascher and Paul Williams’ song spent weeks atop the Billboard charts, and was nominated for an Oscar and Golden Globe) — “Rainbow Connection” stuck.

Equal parts Dorothy Gale, Jiminy Cricket and Little Orphan Annie, the song hits the same optimistic, hopeful existential notes as “Somewhere Over The Rainbow,” “When You Wish Upon A Star,” and “The Sun With Come Out Tomorrow,” but shot through with post-JFK assassination, Watergate, Vietnam melancholy. It’s a theme song with an identity crisis. Something’s beautifully out of whack. Which may be why I liked it so much then, and still do now. It’s optimism tempered with pragmatic realism. It’s confident uncertainty.

Of course, the melody is otherworldly too. Which may be why, as an expectant father some twenty-years-later, I found myself working out the guitar part in my living room as I brainstormed songs for an idea that was just forming: a children’s album that wouldn’t annoy parents.

Chris Abad, Tony Maceli, Ryan Vaughn and I recorded basics in March with Gary Atturio at Galuminum Foil Studios. I tracked final vocals in Maggie’s nursery here in our Upper East Side apartment just a few weeks after she was born.

Brooklyn singer/songwriter Amber Rubarth added the real pixie dust, though. It’s true: we never sat in the same room harmonizing (she contributed backing vocals via yousendit.com). Still, I think of her as the Muse, Siren or Angel of the song, faintly tugging at our hand to seek further, sail farther, and soar higher.

Which is about all I could every wish for my daughter: that she seek further, sail farther, and soar higher.