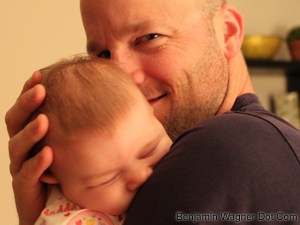 Last night, I bumped into Justin Bieber just seconds prior to his VMA performance of “Baby.” Just twenty-four hours later, my own baby was back in my arms.

This year’s awards marked my first prolonged absence from Maggie since she was born. I was in Los Angeles just five nights, but the days were jam-packed and long.

In the fifteen years I’ve been here, MTV News’ purview has grown by leaps and bounds. I now have a hand in all of it, from the hundreds of articles, blogs and video segments produced for the website to the 200, thirty-second news briefs we aired to the hour-long pre-show. We even had a hand in what we call the “Main Show,” producing three, live breaks in which we showed how the VMAs were performing on social media with our VMA Twitter Tracker. Oh, and we produced at forty-five minute, online-only RapFix Live post-show.

With rehearsals for all three shows, and web and news brief coverage in-between, Saturday and Sunday were a blur of video monitors, laptops, white carpet, and craft service granola bars. Both were six-Excedrin days.

Still, by the time the gorgeous, other-worldly white carpet opened, I was calm. From my position, I spotted Lady Gaga, Drake, Ice Cube, Jason Derulo, The Hills girls, Real World and Jersey Shore casts. And I watched Nicki Minaj and will.i.am perform from about eight feet.

Immediately afterwards, Sway and I repaired to a trailer on the edge of the Nokia Theatre where we met our colleagues from Twitter and Stamen Group. Six or so of us were huddled over laptops watching the Main Shows affect on Twitter. Rihanna showed up to perform with Eminem (surprise!) and people went bonkers, Tweeting some 5000 140-character messages a minute. The big spike, though, was Lady Gaga announced her new album title, driving nearly 10,000 Tweets-per-minute.

The scary part was scripting these mini-news breaks on the fly. My colleague Michael worked with Stamen and Twitter while I scribbled furiously and Sway ran his lines — we had hard in/outs, that is, if we went over we’d be cut off — in the few moments before our appointed breaks. Two minutes out, the AD (assistant director) would begin counting me in. In the seconds prior, my boss (one of the show’s executive producers) said, “We need you to add a line teasing to the Taylor Swift performance.” We franticly dropped something, added her, then our count: “3… 2… 1… cue for Sway!” Of course, he nailed it. And I collapsed to me knees.

The two of us snuck out to catch Justin Bieber’s performance, and bumped right into the sixteen-year-old pop sensation pacing on the edge of his stage. (Of course, I caught their brief exchange on tape.)

All weekend long, everywhere I went, and with everyone I spoke (excepting, perhaps, The Beebs), I was only interested in one subject: Maggie. I showed colleagues, friends and strangers alike photos on my Blackberry, and even sent a few people the YouTube video of her smiling that I shot to keep me company when I was away. I described her chubby cheeks, her chunky thighs, her beautiful eyes. And over and over, I counted down to getting home to her.

Fast forward to tonight. I stepped into our apartment just after five o’clock. Maggie was laying in her crib, staring mesmerized at her mobile. I showered off the plane germs, sent our nanny home, and walked around the apartment singing and talking to her. She’d grown so much! She was focussing on things, tracking them with her eyes. But she turned fussy, verging on the edge of tears in the few moments before her mother was due.

And so I crossed my finger, and put the final mix of my “Forever Young” cover of “Sweet Baby James” on the stereo, and began slowly rocking her. If I say so myself, the recording is gorgeous. Jeff Jacobson arranged a beautiful, melancholy guitar part. I sang a melancholy, soft melody (which Jeff then beautifully backed up). And Patrick Riley arranged gorgeous strings. It’s really one of the prettiest things I’ve ever done.

Maggie must agree. Because before the final chorus, she’d settled into my shoulder an fallen off to sleep.

And that was it. All was well. I was home.