Am I Off The Rails? 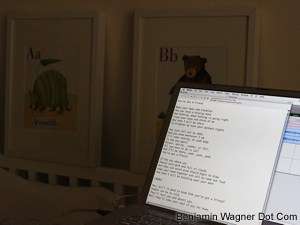 With “Forever Young,” I may be off the rails.

A few weeks ago, rock journos Greg Kot and Jim DeRogatis aired a special episode of their weekly “Sound Opinions” program called “Off The Rails.” In the show, the two tallied artists who’d detoured unforgivably from the promise of their early career: Lauryn Hill, Metallica, Liz Phair. The first spot was assigned to Rod Stewart whose “Stardust: The Great American Songbook, Vol. III” — in the duo’s estimation, anyway — undid Stewart’s work with The Jeff Beck Group, The Faces, and as a solo artist.

“It’s not just that he became a pop-panderer exclusively,” DeRogatis exclaimed. “He decided he wanted to be Wayne Newton!”

The thought that perhaps my forthcoming benefit CD, “Forever Young,” is a bridge too far — too cheesy, too corny, too earnest — and might undo standout moments like “Crash Site,” “Almost Home,” and “Love & Other Indoor Games” dawned on me Sunday night. I was tracking my second-to-last vocal, a plaintive, melancholy, lullaby-version of “You’ve Got A Friend” over Chris LoPresto’s solo piano. (Raining Jane singer Mai Bloomfield will later add harmonies.)

It was one of my most gentle, understated vocals yet — precisely the kind of sounds a rock journo would deride. What’s more, the concept of the album — ten seminal ballads from my childhood recorded by my friends and I as a gift to my daughter and her generation — is the kind of project that marks the edge of one’s career, not the center.

Make no mistake, I couldn’t be more proud of much of my singing here. It’s matured, tempered, warm. Maggie’s changed me. I haven’t strummed my guitar in months, only finger-picked. Likewise, I haven’t raised my voice. Everything is gentler, softer, and less-urgent. Some might say I’ve lost my edge.

To me, rock ‘n roll has always been about rebellion: Dylan at Newport, Lennon at Madison Square Garden, Bono at Red Rocks. Rock ‘n roll and its flag bearers have always pushed against something: faith, sex, God, politics. It is arguable that — at 38-years-old with a decent job, a beautiful wife and adorable baby girl — I have little edge left.

In persisting, though, I am rebelling. The very act of enduring despite critics, prevailing wisdom, trends or taste, is an act of defiance. Even if, for the most part, we sound good doing it.

And if it’s not rock ‘n roll? If it’s not rebellion? If I have, indeed, lept the rails?

I can live with it.