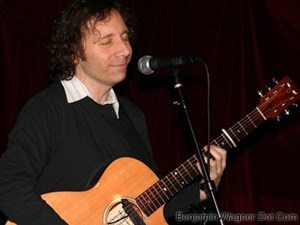 I first met my pal Jeff Jacobson at singer/songwriter Casey Shea’s wedding. He was sitting at the kitchen table drinking coffee with chanteuse Amy Hills. I sat down and slipped right into their conversation, one that continues to this day.

Jeff has a thoughtful demeanor and dry, self-effacing wit. He’s one of the best guitarists and most capable singer/songwriters I know. He pitched in on the first two Holiday Benefit albums, and sings “Sweet Baby James” with me on my forthcoming “Forever Young” benefit album. He’s an awesome guy.

Jeff launched a brand-new, super-innovative website, abatab.com, on Monday. Abatab sell officially-licensed indie sheet music for artists like Ari Hest, Allie Moss, and Bess Rogers. So I asked him a few questions about it. Here’s that conversation in full…

Benjamin Wagner: How did you come to music? What was your first instrument? Was it your college major?

Jeff Jacobson: Well, my mom says I asked to play guitar when I was five, but I just don’t think that’s really true. (Sorry, Mom.) However, I do remember being very young, sitting at the kitchen table with this huge guitar (which I now know was half-sized!), crying and saying I didn’t want to practice. And she said, “Okay, then we’ll stop guitar lessons.” That was a good move, because a year later I asked to start again. I was a psychology major at NYU (which has come in handy in the music business!) and a music minor.

BW: When did you start transcribing? What does that involve? What’s your technique? For whom have you transcribed?

JJ: I started when I was around 12 because there were no note-for-note transcriptions of Van Halen back then, and I really wanted to know how Eddie Van Halen was doing all that stuff! So I got out my trusty tape recorder and found I really loved the challenge of figuring it all out myself. But it does involve listening in ways that people should never be forced to listen to music, haha. I’ll say it like this: most people listen to music horizontally, as it smoothly goes by. Transcribing requires listening vertically, breaking down every beat in fits and starts. I’ve worked for big publishers around the country and have done about 300 books by artists from all over the spectrum: John Mayer, Bonnie Raitt, Metallica, Eric Clapton, Les Paul, Tom Petty, The Black Keys, Beck. And because I do guitar books, there’s tons of heavy metal. I can watch MTV Headbanger’s Ball and recognize all of the bands before their name comes up on the screen. It freaks people out!

BW: How/when did your solo career come about? How has your day job transcribing influenced or informed your own music? Do your songs begin with the music? Or the melody?

JJ: I’ve been writing songs since I was a kid, but was never confident enough in the material to perform them until about 5 years ago. For me, the music always comes first and then I love the challenge of finding the right sounding lyrics that tell the story and evoke some type of imagery. If I can’t see pictures in my head while I’m writing the lyrics, I know I’m on the wrong track and they go right in the garbage can (which can get pretty full). I’ve been able to pretty well separate out transcribing from actually playing or writing music. Transcribing is honestly not very creative, as the goal is to figure out and notate exactly how a certain artist plays their songs. Writing is much more free-flowing and creative. But still, transcribing has helped me to be able to listen to music and have a sense of what’s going on – give things a name so to speak, so when I hear a certain type of chord in my head when I’m writing a song, I can tell what it is and pull it out of my bag of tricks… well, usually.

BW: Did the release of your eponymous LP in 2007 meet your creative expectations? What about in terms of career or impact? Having been immersed in the music business for years, how did you find the experience?

JJ: Conceptually, it turned out how I thought I wanted it to. I set out to make an album where my guitar wasn’t the focus all the time, with varying colors and textures. And the album really has a nice balance of that while still sounding like all the songs belong together on one album. But in the end, it ended up being a bit less personal than I would have liked if we had kept the production a little more streamlined. Don’t get me wrong, there are no tubas or symphony orchestras or anything like that. But I learned that less really is more, and earlier this year I put out a free download (the “Lunch In The Park EP”) of a live solo show, just me and my guitar. Seemed right somehow.

The experience of making albums really is kind of cool. It’s a lot of work but it’s great to hear the songs slowly build up and start to sound something like music. ‘Cause at the beginning, you really wonder if they ever will. And it’s fun because musicians are generally funny people to be around. But from a life perspective it can be all-consuming, and when you’re done, you’re kind of glad it’s over. I remember there being a lot of stomach aches.

BW: How did you get involved with The Undisputed Heavyweights? The group had some phenomenal local success. How did you find that experience?

JJ: Casey, Wes Verhoeve and I all started out in the NYC music scene at the same time. We met at various open mics and found we shared a love of 40’s/50’s pop music and culture — Sinatra, Dean Martin, Sammy Davis Jr — when it was about more than just the music. It was entertainment, too. Those guys were amazing; they could do it all and were also really funny. The three of us all were going to tons of local bands’ shows and kept saying how tired we were tired of seeing bands where there was just no entertainment value. Casey really was the one who brought that element to the band, and it was tons of fun being the straight man. Those shows, and the rehearsals and all the crazy stuff we did, those were some of the most fun times I’ve ever had. It was almost like being in The Monkees — in a much smaller way of course — and also, they were way better. But to be able to do it with your best friends was really kind of special.

BW: Word is your on hiatus from writing, recording and performing. How come?

JJ: I just don’t have a reason except to say that I felt that I needed to get away from it for a while, maybe even for good, not sure. But when I decided to step away, I knew instantly that it was the right choice. And looking back, even without ever having had this huge career, I’m feeling more and more that I accomplished what I set out to. Sure, at the beginning, I wanted to be a hugely successful singer/songwriter touring all over the country. But in the end, I’m finding that I mostly wanted to confront the challenge of playing my songs for people. I avoided it for years — “the songs aren’t good enough, I’m not ready,” etc. But somehow I found a small kernel of confidence to actually do it even though I was totally scared out of my wits. And that’s something that I now carry with me when I approach other challenges that I might initially feel I can’t do. I think we all have that little kernel of confidence even if we don’t know it. It’s more a matter of being willing to look for it when you’re scared to do something you know deep down you really want to do.

BW: So how did the idea for Abatab come about?

JJ: I had been thinking for a couple of years that I wanted to somehow combine my transcribing with my love for indie music and the community of people surrounding it. But I just couldn’t come up with a viable business plan that would work for everyone involved — artist, fan and me, too. Then, and I don’t think this is a coincidence, the very week I decided to step away from performing, as soon as I came to terms with it, the last piece of the puzzle fell into place in terms of a profit-sharing system I implemented for the artists that they’re really responding to. In a nutshell, my goal for the store is to offer indie fans accurate, affordable sheet music, provide artists with a new revenue stream, and also promote new artists, which I do by offering free sheet music with mp3 included.

BW: Where’d you come up with the name?

JJ: The name took a while, and I have a notebook filled with pages of horrible names – seriously bad. I had narrowed it down to a couple of run of the mill names I really wasn’t happy with and then had friends say, “you should come up with something non-sensical – you know, like ‘Hulu!'” That sounded great but I felt that it had to mean something, too. I remembered the Genesis song “Abacab,” which is just a nonsense word representing that song’s form (a=verse, b=chorus, c=bridge). I was, like, perfect! What’s more basic to a song than it’s form? And my site at it’s core is all about songs. So I changed the “c” to a “t” (since “tab” is a short-hand term for guitar sheet music) and voila! Abatab.

BW: What’s your plan for the business? And how did you find web and business development in relation to other, more-creative efforts like songwriting?

JJ: I’m finding that there’s so much I learned from being a singer/songwriter and songwriting in general that I can bring with me to developing the business. Building an audience for both requires a similar mindset – the willingness to do the little things, to work hard and be patient. Not ever settling for “good enough”. Even having spent all those years writing lyrics, fiddling around with words and their meanings and sounds. Whether it’s composing emails to artists I don’t yet know or writing text for the site, phrasing things just right and making the best choices with words can give people a tangible sense of who you are and what you’re about. And that helps to create a connection. And in the end, that’s mainly what I’m hoping to do. So I guess it really hasn’t changed all that much.

Visit abatab.com today. And hang tight for Jeff and my awesome cover of “Sweet Baby James” on the “Forever Young” benefit available October 2.