Many, many July Fourths ago, before Google Maps or Garmin GPS, before to the city’s best efforts to develop greenspaces, and well before being a husband or a father, I set out to circumnavigate Manhattan on my bike. I managed pretty well below 125th Street, but was thwarted by the vast complex of unknown bridges, urban developments, and industrial wastelands of the city’s northeastern reaches.

Since moving to the Upper East Side in April, I’ve endeavored to tackle those unknowns, searching Google, pouring over DOT and MTA maps, and teasing at the edges of my known universe on long runs. I’ve made the Triboro Bridge, Wards and Governer’s Islands my playgrounds, run to Yankee Stadium, and pushed as far northeast as Orchard Beach. One stretch of Manhattan real estate has eluded me, though: Harlem River Drive. That is, until now.

Inspired in no small part by the realization that the New York City Triathlon is just a few weeks away and I haven’t ridden more than ten times in the last year (or, for that matter, swam once), I studied my maps, and set out during a narrow sliver of available time (read: Maggie’s nap) to find my way up and along the Harlem River.

I raced north on First Avenue, west to Third, over the Third Avenue Bridge. I was to 161st and Morris (the under-safe and over-budget Bronx County Hall of Justice) in roughly one fifth the time of my last two runs through the Bronx, and coasting past Yankee Stadium (Counting Crows’ “Hangin’ Around” was blaring from the ballpark where the Toronto Blue Jays later felled the Yanks 6-1) in a little more than twenty-five minutes. (Hard to believe Yankee Stadium used to seem so far away; it’s actually quite close, and quite easy to get to).

I crossed the Macombs Dam Bridge (New York City’s third-oldest bridge dating to 1895) some 2500 across and 150 above the Harlem River, then began the long, slow uphill to St. Nicholas Place. Which is where the magic happened. I turned right, and coasted down the west side of the street towards Harlem River Drive. The west side aligned me with exiting southbound traffic, though. I wanted to head north. I jumped the curb, slid between two cement pylons, then spotted it ahead. I crossed the drive, then settled in along the river with a “Whoop!”

The river narrowed and mellowed, buffeted to the west by Highbridge Park’s sheer walls of bright green. The trail was wide and empty, the sun high and bright. It was clear sailing beneath the great, steel arches of High Bridge (a now-closed pedestrian bridge); the Alexander Hamilton Bridge (part of Interstate 95); and the Washington Bridge, past Columbia University Boathouse, and back onto the city’s grid.

I turned onto Tenth Avenue and headed north to where it intersected with Broadway, then raced beneath the elevated tracks. There beneath the racket of the subway, I felt a little like Gene Hackman in “The French Connection” (though the film was apparently actually shot below the D line in Gravesend, Brooklyn). I crossed the island’s northeastern-most bridge, Broadway Bridge, then turned around and headed home along the west side (below the GWB, past The Little Red Lighthouse, etc) as I have a thousand times before.

In just under an hour and a half and some twenty-one miles, I pushed past my boundaries to unlock a few new vistas. I felt like I’d been gone a lifetime. Fortunately, Maggie was just waking up. 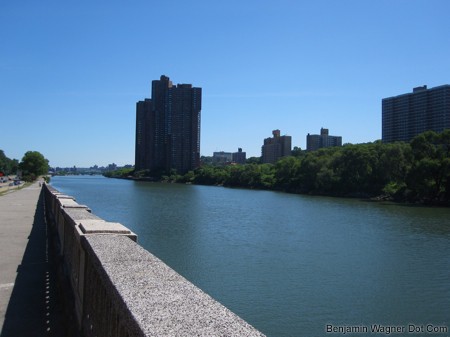 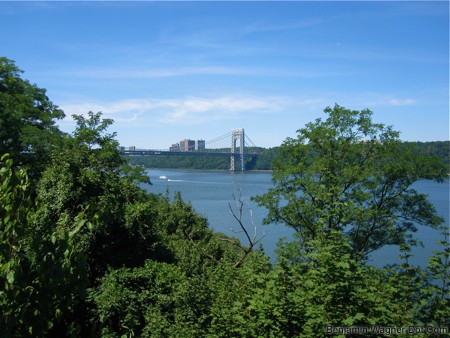 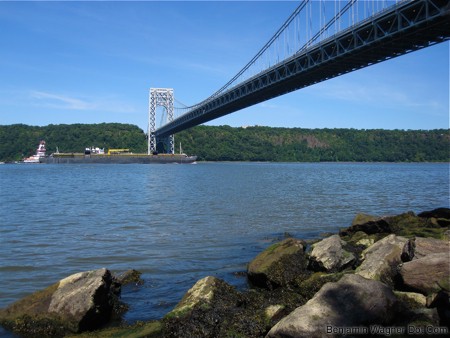 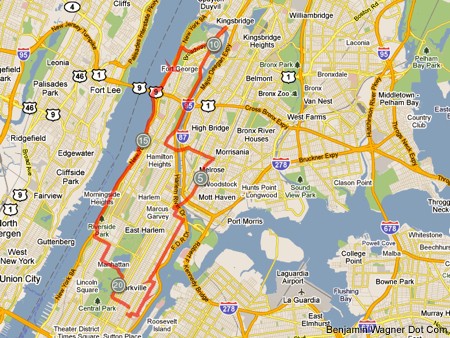