Wake Up, Maggie (I Think I Have Something To Say To You) 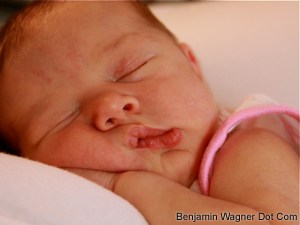 Tony, Chris, Ryan and I started recording “Forever Young” in February. The record is due in October, and benefits The Fred Rogers Center. The conceit is simple: record a bunch of classic songs that kids and parents alike love with a bunch of friends and release it for charity. Said conceit came with a perk too: throughout Abbi’s pregnancy, I placed headphones on her belly and played little Maggie these works in progress.

Moments after she was born, I sang one of those tracks, “Golden Slumbers,” to her. She calmed immediately. I was psyched.

In the intervening three weeks, though, I’ve discovered a simple truth: Maggie is far to young to respond to complex melody, let alone multiple instruments, percussion and harmony. Soon enough, but not yet. For now, her interests are simple: sustained notes, and white noise.

Now, as you, Dear Reader, know, I’m a big fan of the home studio. I’ve recorded multiple albums and numerous unreleased tracks on ProTools. The new digs, the imperative to make space for Maggie and my relative lack of songwriting inspiration (bliss doesn’t do much for the creative impetus; who wants to hear a happy song?), though, mean that the bulk of my equipment is stashed away in the closet. Until last week.

Our first days home from the hospital were brutal: feed, poop, feed, poop, feed, poop. No one was getting any sleep. Worst of all, we couldn’t sooth Maggie. Somewhere in the wee hours of our second, sleepless night, I fell back into bed exasperated. Which is when it dawned on me: the shower! Abbi’s womb, comfortable as I’m sure it was for Maggie, was a pretty loud place: Abbi’s heart was nearby, to say nothing of her gurgling stomach and whooshing veins. The white noise of water falling onto the shower curtain replicated those sounds. The moment Maggie crossed the thresh hold into the bathroom, she fell asleep. It was our go-to move. Baby can’t sleep? Shower curtain white noise!

After a few nights, though, I began to worry about our impact on the environment. Sure, Maggie was sleeping, but how much water were we wasting. Which is when I turned to Abbi and said, “Wait, I’ve been making recordings for years. Why don’t I just record the water falling onto the shower curtain!”

Which is why last Wednesday found me setting up my ProTools rig in the bathroom to knock out a seven-minute, 44kHz stereo recording which I then mixed, mastered, ripped as an mp3 and put on Maggie’s iPod.

Abbi loves it, Maggie loves it, and New York City’s reservoir system is none the worse for our wear. I even did a five-minute remix with less high end!

For months now I’ve wondered and worried how fatherhood would affect my recording career.