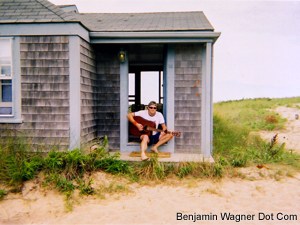 It’s been quite the few weeks around here. As more than one person has said, “You delivered two babies in two weeks!” Of course, while I couldn’t be much prouder of “Mister Rogers & Me,” the film doesn’t hold a candle to Maggie.

Nonetheless, the film’s premiere has played a roll in my three-week paternity leave. I snuck away to the Nantucket Film Festival last week where the film was met with a wonderfully warm response. One viewer commented, “Within minutes of the film starting, my goose bumps (not to mention tears) suggested that I was going to walk out of the auditorium forever changed by what I saw and heard.”

The film is, not surprisingly, loaded with my music alongside a score by Rich Sancho and Chris LoPresto, and two songs by Casey Shea. The primary reason I used my songs (“Hollywood Arms,” “Dark Blue,” “The Last Time” and “Breathe In,” among others) is cost; I knew I could afford my songs. But as more than viewer has suggested, there’s a deeper musical connection between Mister Rogers and me.

I recently spoke to Museum Views’ Homa Nasab who tapped more deeply into that music connection.

Homa Nasab – Mister Rogers and you both studied music. Did that help you to connect with him at a deeper level than if you hadn’t shared that passion and discipline?

Benjamin Wagner – Definitely. We played songs for each other the day we met, and I sent him my CDs as they were released. In fact, the day we met, I played him a song called “Summer’s Gone” which I love, and am really proud of, but is laced with sadness. I think he picked up on that sadness, and that it provided him insight into me that led him to ask about my parent’s divorce. Time and again, the folks we interviewed said that Mister Rogers was particularly adept at listening closely, identifying what was broken in us, and helping us heal. For both Mister Rogers and me, I think, music provided both shorthand for that communication, and a process for healing what was hurt.

HN – The rhythm of the film is consciously and defiantly measured…somewhat like your own music which sounds inconspicuously organic (can we say that about music… you know: the man, his lyrics and guitar with minimal production?). Can you talk about your choice to adapt this (slow) rhythm…?

BW – We absolutely set out to make the film concertedly slow. It opens in New York City with quick cuts, lots of motion and noise, and then moves to Nantucket where it slows down and the sounds become natural: waves, wind, birds. And while I love uptempo rock, my music definitely tends towards acoustic, the midtempo, and minimally-produced. In fact, I credit Mister Rogers (along with Jeff Wilco’s Tweedy) with giving me the courage to perform to my strengths as a musician. When I first moved to New York, I tried on all kinds of rock costumes: leather pants, fingernail polish, gold lame. But jeans and a t-shirt, earnest, contemplative and melancholy, come naturally. Just as “I like you just the way you are” helped me own the fact that I’m not cool (or more importantly that it’s superfluous whether anyone thinks I am or not) that same set of values – feelings are ok, that which is mentionable is manageable, etc – gave me the confidence to wear my heart on my sleeve as a musician. So there’s a chicken/egg component to it. My music (which you hear in the film) developed with the film.

HN – Musically and philosophically speaking…the film has a very Zen quality to it. Somewhat like your “Breathe In” from the 2008 album The Invention of Everything Else…

BW – “Breathe In” was very much written in a post-Mister Rogers mindset. That is, I was set free from concerns about commercialism, trends, and any other expectations by the time I’d written it – thanks in no small part to Mister Rogers (and in no small part to growing up in general). In fact, “Breathe In” was going to be the credit music until I heard my pal gorgeous “Love Is Here To Stay” which had something of a “Hey Jude” rally cry to it. Casey’s track makes the end of “Mister Rogers & Me” feel like a movement, or the beginning of one, not the end of something else. It makes you want to be a part of something bigger.