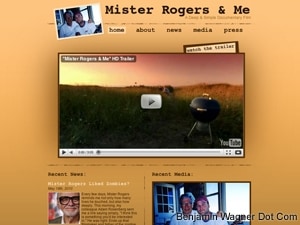 In the event you haven’t checked in on my other website, “Mister Rogers & Me,” lately, there’s a quite a bit going on. For starters, we’ve relaunched it.

Of course, the site’s relaunch was timed to coincide with today’s publication of the Nantucket Film Festival schedule.

Of course, Abbi’s due just one week prior to the film’s premiere. Which is perfect. I was just about to release “Crash Site” when I met Mister Rogers there on Nantucket. I played him “Summer’s Gone,” a song rife with loss. He asked about my parent’s divorce, a wound he sensed was still seeping. Nine years later, thanks in no small to Mister Rogers and the journey that came of our conversations, that wound is significantly healed, and here I am not just married, but expecting. One might think he knew it all, all along.

So if I make it, terrific. If not, the film’s premiere is in good hands with my brother. And anyway, life’s all about process, not outcome, right?