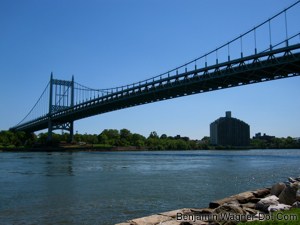 It took me less than an hour back in the city to spot a dead body.

I opted to shake of my sixteen-hour commute from Yemassee, SC, to New York, NY, on Amtrak’s Silver Meteor last week with a bike ride (inspired secondarily by a rapidly approaching triathlon in July).

I pedaled my Cannondale north to 103d Street, then east across the pedestrian bridge connecting Harlem to Ward’s Island. Ward’s and the adjacent (and connected) Randall’s Islands are home to huge tracts of grassa and athletic fields, as well as several public facilities, including Manhattan Psychiatric Center, Kirby Forensic Psychiatric Center (which serves the criminally insane), a New York City Department of Environmental Protection wastewater treatment plant, and even a Cirque du Soleil production called “Ovo.” The Triborough and Hell’s Gate Bridges soar overhead, connecting the twin islands to Queens. It is ringed by miles a freshly-paved and nearly-empty bike path, all with spectacular views of the city across the swirling East River.

I banked right off the Ward’s Island Bridge, pointing myself downtown across an especially-turbulent stretch of the East River above Roosevelt Island called Hells Gate.

The sky was clear. The sun was bright. The river was sparkling, as was the city below. Which is when I noticed the yellow police tape stretched out across the path just a few hundred feet beyond me, and the four policemen standing over a body. I slowed, and rode up onto a grassy hill just above the path — there, at the southernmost tip of Ward’s Island with a sweeping, panoramic view of New York City like Oz across the poppy fields — an elderly African-American man had apparently tumbled face first off of the bend and onto the pavement. His eyes were closed. A white blanked was draped across his back. He was dead.

At one time, I’ve come to learn, that point at the southeastern tip of the island was officially designated “Negro Point”, based on the unofficial usage of riverboat workers. In 2001, though, Parks Commissioner Henry Stern renamed it Scylla Point and paired it with Charybdis Playground in Astoria Park; the two features are on opposite sides of Hell Gate, just as the mythological monsters of Scylla and Charybdis were on opposite sides of the Strait of Messina.

And so it was on this beautiful, almost-Heavenly day when I broke free of my tiny sleeper car and rocketed out of the city’s punishing grid that I saw a dead, black man at face down between two monsters facing Hell Gate.

More troubling, perhaps, were I less accustomed to shocking city scenery like men sleeping in pools of vomit, or women defecating on a curb. Listen, there are eight million people in the Five Boroughs. Sometimes, it gets ugly. One develops a thick skin.

I pressed on, passing beneath the massive foundations of the island’s two bridges and it vast complex of baseball fields beyond. I paused at its northernmost point to make out Riker’s Island and LaGuardia Airport across the white-capped bay. I turned back towards Midtown looming small in the distance byond the bridges, and marveled how far north I’d pushed. I rode further, leaving the pavement behind to trace the edges of the Bronx Kill, a tiny, narrow creek separating Randall’s Island from The Bronx. A startled gaggle of ducks paddled away towards the rail yard and warehouses beyond.

Back on the East River, a tug boat pushed a crane toward the Willis Avenue Bridge. A patrol boat departed NYPD’s Harbor Patrol. Vehicles of every shape a size buzzed around me: jets, helicopters, trains, and miles upon miles of cars and trucks on Robert Moses’ massive, neighborhood-destroying, suburb-building highways.

I pedaled southward, pausing beneath a willow tree to gaze a while at the cityscape below. Eight million individual lives were pulsing around me, swirling like electrons: bouncing and breaking, colliding and connecting. I couldn’t shake the image of the dead man, face down at the city’s feet. It struck me there so many miles above Simon & Garfunkle’s 59th Street Bridge (“Feeling groovy!”) that maybe we are all rocks. Maybe we are all islands, all six billion of us: alone. It’s the highways and rivers valence that connects us. Those sometimes-tenuous sometimes-iron clad links make us an archipelago, though, a planet of city island nations.

It was then that the road of the traffic became a whirl, like crickets or wind, and I realized that a moment of zen is wherever you make it.