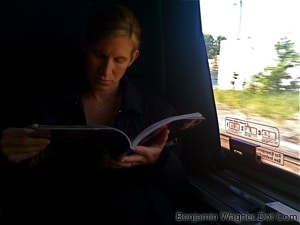 For 1600 miles and thirty hours this week, Abbi and I sat reading, writing, and resting as Amtrak’s Silver Meteor ushered us roundtrip from New York City to Yemassee, South Carolina.

It was an experience.

Our 6′ x 4′ sleeper room was pure, NASA-age innovation. The sink folds down. The toilet folds up. The top bunk descends from the ceiling, and is narrow enough to require a web of seat belt-like webbing. Cup holder, light switches, vents, hooks, hangers and storage are tucked into every nook and cranny.

Leg room is scarce, but windows are ample: double-decker and double-wide. You see the backsides of things from here: backyards, back streets, vacant lots and unspoiled woods.

It’s all comfortable enough, though only not as romantic as one might wish. True, the car pitches and rolls along with a soothing forward momentum to it all. But the creaking and rattling of the plastic-molded interior is louder than the soothing clickity-clack of the rails or distant horn.

Oddly enough, if a flight half was bumpy, I’d need to triple down on Xanax. Makes no matter here, though, even when another train whizzed by in the opposite direction with an ear-popping thud.

Amtrak leases the rails from CSX. Their massive freight trains (I counted five engines and 113 cars on one last night) take precedent, then, leaving passengers at a distinct disadvantage to products, which may have accounted for our hour delay upon return.

Gliding through the inky black Virginia night, though, or soaring across a placid Susquahanna, it was a travelling oasis of calm and a tiny home away from home that just happened to be buzzing along at sixty-some miles an hour.