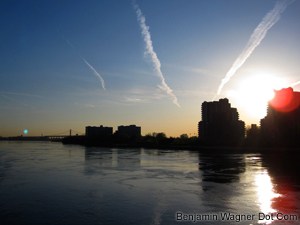 If a guy’s really lucky, he sees some thirty thousand sunrises.

This fact dawned on me as I turned eastward on 86th Street the other morning. The sun burst bright-ornage through the pale-green leaves as I jogged across East End Drive and I thought, “These are finite. Enjoy ’em.”

The trouble is, I don’t think I ever imagined my life beyond a point some time prior. I may have imagined myself onstage, or fantasized myself a star, but I don’t think it ever dawned on me that life would ever lack those sorts of accolades. I’m finding it a far subtler, more plodding thing: one painful foot in front of the other punctuated by fleeting, though sometimes massive moments of truth, beauty and clarity.

Th East River isn’t really a river at all. It’s a tidal straight choked with whirlpools, eddies and risk driven by the waxing and waning of the moon. The narrows just above Roosevelt Island is called Hell’s Gate. Despite this, the sky opens up there. The temperature drops the second I meet it. The air turns sweet and cool. The sun peeks over Queens. And I turn towards the north, running alongside the bumper-to-bumper FDR.

Most days, though, before I know it, the sun’s fallen behind New Jersey. The miles have passed in a blur. The hours have elapsed in mere seconds. And I find myself reckoning with just 13, 344 14, 344to go.