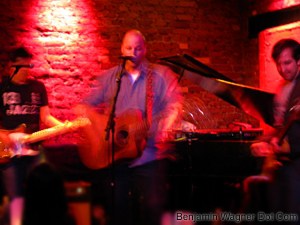 It wasn’t until somewhere around Christopher Street that I realized that Thursday night’s Rockwood Music Hall set was littered with references to breaking silence, speaking up and being heard.

From “Giving Up The Ghost” (“It’s impossible to argue / It’s impossible to scream”) to “Live Forever” (“There’s nothing left here to say”), “St. Anne (Of The Silence)” to “Dear Elizabeth” (“I still have something to say”), “Trying To Tell You” to “I’ll Be Waiting” (“This is a message to you”), the set — in this case drafted by my pal Chris Abad but completely reflective of my body of work — was crowded with muted observers, silent bystanders, and anxious also-rans just dying to be heard.

Why it should take me some twenty-two years into playing rock shows — better still, to one marketed as my “Last Show Ever” — to realize this thematic cohesion, well, I’m not sure. Timing is everything. I just cleaned my high school artifacts out of my mother’s basement. I’m an expectant father. My grandmother just died. I’m moving in a few days. Take your pick. Anyway, everyone knows the cliché (or myth, or both) by now: discordant household’s existential din drowns out the young, sensitive artist driving him to construct an imaginary world into which he escapes and later mines for fame and fortune. The former, anyway.

This penny-ante breakthrough lay dormant in me for an hour or two until — as if we hadn’t been planning and rehearsing for weeks — we found ourselves there, Chris, Ryan Vaughn, Brian Killeen, Chris LoPresto and me, breaking the silence together. And what a sound! With this new combination of players, and a short rehearsal period, we were forced to listen to one another and discover what the songs wanted to say. Bolstered by the beautiful din of of instruments weaving and blending, I leaned back and relished the wall of sound around me.

Rockwood filled steadily, until the room was crowded with friends and family come to mark my good fortune, five years to the day that Abbi and I met there, and less than three months until we bring our first child into the world. The show might not be my last (“Yeah, that probably won’t happen,” I said three songs in), but it marked the edge of something new, something huge.

And so it took even me by surprise when — just a few songs after pledging to go long on the rock and short on the talk — I began rambling about my minor subway revelation with the audience.

“In a few hours,” I said, “My brother and I are flying to Waterloo, Iowa, to bury my father’s mother, my grandmother. The last time I saw her was the night before the Iowa State Fair. My cousin, Andrew, and I were performing at my uncle’s for the family members who we knew wouldn’t make the commute. She sat there watching us, a little uncomfortable, maybe, with all our emoting or whatever right there in front of her. She had a breathing tube in her nose, and was squinting a little bit, but the corners of her mouth were turned up just so, as if she really wanted to smile.”

“On the way down here tonight I realized that all of my songs are about trying to say something. My sense is that there was a lot of silence, a lot unsaid, in that household. And I’m sure that’s not unique to my family, or Waterloo, Iowa. It’s true of all families, of all of us. So I hope that tonight I can make manifest some of the things Dorothy might have wished she’d said.”

All week long, I’d told anyone who’d offered condolences, “It’s ok; she was ready to go.” Suddenly, though — there in the spotlight, there on stage, there with my friends — I felt this terrific loss begin to swell up in me. My voice cracked. I took two extra measures and one very deep breath to gain my composure. Because suddenly, “Dear Elizabeth” — a song I wrote nearly ten years ago, a song I have sung hundreds of times to thousands of people, a song that the band calls simply, “The Hit” — reminded me something vital, something compelling, something more urgent than ever: don’t die with the music left in you.