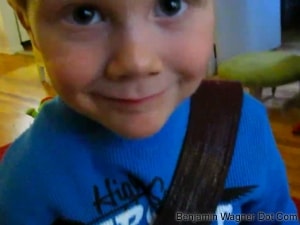 “Dude, is there any way you can watch the boys this afternoon?” he asked breathlessly. Jen took Ella to the hospital. I’m running up there to meet her.”

My pointer finger was on their Upper West Side buzzer fifteen minutes later. I could hear Ethan and Edward’s tiny feet scurry on the hardwood above me as I climbed the four flights of stairs. I knocked on the door to the sound of giggles. The door swung open mysteriously to an empty hallway.

The boys leapt from behind the door, then took off down the hall. Chris was writing a list in the kitchen.

“Hey man,” he said shaking my hand with a pained expression. “Thanks for coming over so quickly.”

He ran through the list (pizza’s in the oven, Ethan drinks soy milk, Edward drink’s cow, etc), then distractedly began loading his backpack with odds and ends: clean socks, a water bottle. All the while, the boys ran around the apartment, laughing and screaming and bouncing off of each other like bumper pool. When they disappeared into their bedroom to the sound of muffled laughter, he turned to me and squinted like Clint Eastwood.

“I’ll bet their jumping on the beds.”

Indeed, we found them climbing, tumbling and laughing on their loft beds.

“Gentlemen,” he said, stopping them in the tracks. “What did I say? The beds are for sleeping, not for playing.”

They quickly descended, and ran back into the living room. Chris pulled on his coat, and stepped out the door.

The boys sat at the table with their pizza for approximately thirty seconds, then resumed their frenetic living room rumpus. Edward dumped a box of cars onto the floor, scattering the tiny metal land mines like jacks, then started blowing one of those high-pitched, siren whistles. Ethan began bellowing on a green plastic horn as he leapt from the couch to the hardwood floor. Then they ran for the bedroom and began climbing onto the same loft beds their father warned them not to climb on less than five minutes prior. I narrowly escaped meltdown when I pried Edward from the metal ladder.

We sat on the floor, Edward and I with guitars, Ethan on drums, and began writing a song about a Tiger named Gilly (Edward’s idea) and his friend Phillipe the Penguin. It was a simple little number, mostly a C chord. And it worked. The boys focussed up, suggesting lyrics and singing along. But then Ethan rebelled.

My eyes lit up.

“Whaddya’ think about this?” I asked.

And we were off, Ethan randomly tapping on his bongos (and anything else within arms reach) with chopsticks, Edward stabbing spastically at his guitar, shaking his hips, tapping his foot and blinking his eyes and like a pint-size Elvis.

We played all afternoon, writing silly songs like “Crazy Nephews” and “Stinky Jack The Pirate.” The boys named our fledgling band, “Stinky Jack,” and imagined us performing at “Shark Hall” (thankfully, they’ve yet to discover that all arenas are named for corporations, unless Ethan has a shell corporation, Shark, Inc., somewhere in The Caymans). Ethan MC’d every performance, “Ladies and gentleman! Thank you!”

You know me: I tried desperately to get one, clean take of “Crazy Nephews.” Alas, neither a six nor a three-year-old’s attention span is made for prime time. Still, we wiled away the afternoon with nary a nephew leaping from a loft bed. Which is about all an uncle can ask for.