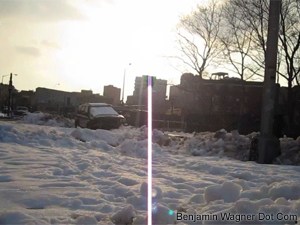 Jamie Leonhart and I arrived to our “Forever Young” recording session a few minutes early, so set out for a cup of coffee.

The sun was broken free of the weekend’s snow-choked clouds. The trickle of melting snow hummed beneath the rumble of passing subways, far off-music and a faint inkling that birds were beginning to return from their winter hideouts.

Galuminum Foil Studio sits at a crossroads of Brooklyn neighborhoods south of Williamsburg’s newly-gentrified lofts and studios, north of Bed-Stuy’s Marcy Projects, and west of Bushwick.

The streets are wide, nearly empty, and buffeted by low-lying, brick warehouses and razor wire-wrapped vacant lots. The sidewalks were thick with snow, still, a few pedestrians passed. Most were young Hassidic men repeat in their Shabbat shtreimel. And most led a small gaggle of adorably costumed children.

Sunday was Purim, the celebration of Jewish deliverance. The festival celebrates the story of Esther, second (and secretly-Jewish) wife of Persian King Ahasuerus. When the King’s prime minister, Haman, is disrespected by Jewish palace guard Mordechai, he issues a decree to exterminate all of Mordechai’s people. When the King discovers that his wife is in fact Jewish, and that Haman has kept secret Mordechai’s aid during a plot on the King’s life, Haman is hanged, Mordechai is promoted, and his people are saved.

Purim is marked, then, by boisterous joy, revelry and feasting. Children’s costumes, apparently, are a more recent addition to the holiday stemming (as most of the Hassidic Jews of the neighborhood do) from Eastern Europe. Children dress as the protagonists in the Book of Esther, as well as Biblical personalities such as King David to disguise the their identities as Esther did hers.

The children’s costumes were, of course, in stark contrast to their parents’ demure Shabbat finery. Jamie and I smiled as we passed pint-sized policemen, soldiers, pirates and fairies. One little girl tottered leapt a snow bank dressed as a jack-in-the-box. My favorite site, though, was that of a two-foot King Ahasuerus holding his father’s left hand while tugging at his white beard.

Inside, Jamie unpacked her harmonium, a piano-like instrument powered by a hand-operated bellows that blows through sets of free reeds that sound like an accordion. The sound is gentle, soothing and steady, like a baby’s sleepy breathing.

“Amazing Grace” is a Christian hymn written by English poet John Newton in 1779. During the dark chapters of American slavery, the song become an emblematic spiritual. The song saw a resurgence in popularity in the U.S. during the civil rights turmoil of the 1960s.

My grandmother loved the song, so much so that my mother asked me to sing it at her funeral in 1996. It’s always moved me, often to tears, as it somehow connects me deeply with feelings of adversity overcome. Of deliverance.

There is a transformative power that is applicable… The transformation of suffering into beauty, of alienation into empathy and connection, of the unspeakable into imaginative.

Something in my brief but meaningful friendship with Jamie led me to believe that we’d connect on that. Little surprise, then, when I asked her to duet with me and told her why, that she said, basically, “Yeah, me too.”

We settled on the key of C, and the ballpark of a tempo, then sang it together, there alone in that great room with Bob Dylan looking down from the rafters.

Afterwards I whispered, “I feel the weight of everyone who ever sang this song before,” and grimaced.

We retired to our corners: Jamie tracking the harmonium in the great room, me in an iso-booth by the door. We tried a click, but waived off its stiffness. The harmonium, it’s working parts old and creaky, clicked and gasped. I sang in a hush, settling as best I could into the deep meaning and long history of the song, waiving my hands like a conductor. Jamie followed my vocal, ebbing and flowing with each line.

By the third pass — uncertain as I was about my performance but cognizant of the ticking clock and Jamie’s six-month-old son, Milo, waiting at home — we decided we couldn’t do much better. I moved to the control booth and marveled as Jamie effortlessly knocked out her harmony vocal.

Afterwards, I walked her to her car, tucked the harmonium in the passenger seat, and waved her off. Tiny shards of snow fell through a clear, sun set sky like glittering confetti. The neighborhood sparkled with the tiny sound of grace delivered. And finally, for the first time, I could see it shining there before me.