“Forever Young” LP Due This Fall 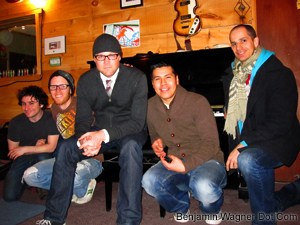 Though the idea behind this new record gestated slowly, it ultimately came together pretty quickly. It starts, I guess, with Ethan.

My brother’s first son, Ethan, was born seven years ago this June. I was eager to expose him to the joy of making music from the start. I bought him bongos, a piano and guitar all by his first birthday. Few things have made me happier in the intervening year’s than witnessing sing-a-long rock shows break out (now featuring my older brother Christofer and Ethan’s younger brother Edward) in their Upper West Side living room. Except maybe the looks on their faces when they see Uncle Benjamin rocking out downtown.

A few years ago, Rockwood Music Hall talent booker (and pal) Tommy Merrill offered me an otherwise unenviable Saturday afternoon slot. With an eye towards I decided to court the Dan Zanes market, and make it an “all-ages” show.

I’ve been performing these “Kid’s Shows For Kid’s Of All Ages” off and on for more than a year (in fact, here’s a video my dad shot last year). They’re not sets full of “Twinkle Twinkle Little Star” and “Itsy Bitsy Spider,” but songs kids and parents can enjoy — timeless classics like “You Are My Sunshine” and “This Little Light Of Mine.”

Of course, all of the above was done bearing in mind the eventuality of my own fatherhood. Fast forward to this fall, then, when Abbi told me she was pregnant and we began this long, exciting and terrifying journey together. My music career (if you want to call it that) wasn’t paramount, but it was present in my thinking, planning and scheming. “What next?” I wondered. “How will I ever make records again?”

In fact, you may have inadvertently been one of my Facebook friends who helped me answer that question. Earlier this year, I asked “What’s your favorite sing-a-long song?” The response was significant. I got hundreds of answers from friends all over the planet, everything from “Itsy Bitsy Spider” (drat) to “Morning Has Broken.” I let those songs percolate in my head, and went about my work…

Ideas are funny. They stew in their own juices, expanding or contracting depending on the viability of their own ingredients. Sometimes they wither, other times they shift, morph and evolve into something else. At some point in the last ten weeks, this one shifted. Like life itself (apparently), it struck me like a bolt of lightning. Two, actually.

The first was to tear a page from the Santana playbook. You’ll recall that, in 1999, the aging-but-venerated guitarist tapped young performers (Dave Matthews, Rob Thomas, etc) to add vitality to his new record, “Supernatural.” It ended up being his biggest album in decades. I decided to do the same, not for the sake of sales (which have slowed to a trickle as my performance schedule has halved, then halved again in recent years), but for the spirit of the record. Which would you rather hear, my solo performance of “The Rainbow Connection”? Or as a duet with Amber Rubarth? Exactly.

The second idea? Do it all for charity. Music (sadly) isn’t the primary breadwinner in my small stable of jobs, hobbies and pastimes, anyway. Why not go the “Holiday Benefit” route and give all the proceeds to some great kid’s music charity?

So all of this was floating around in my head and on various sketch pads (I’ve been drafting fictional album track lists since I was in high school), revealed only in small burst of conversation (inquiry, really) with Abbi. Until last month’s “Hope For Haiti Now” telethon. I was prattling nervously backstage with longtime colleague, father of two, and one-time “Living Room Tour” host, Gil Kaufman, when I sprang the idea on him. “Do it now,” he said. “You’ll never have time once the baby comes.”

The next morning, of course, found Abbi and me on a beach in Dominican Republic. A few days in, when the sun and waves had worked their magic on her, I began unspooling my great plan. Seconds after Abbi bought in, I was on my Blackberry scheduling studio time with Chris Cubeta, and lining up all-star special guests. Amazingly, everyone said yes. And so, by the time I lined up at US Customs in New York City, it was all lined up before me: the tracks, the band (Chris, Tony and Ryan), the guests, and the plan.

Saturday afternoon, the guys gathered at Chris Cubeta’s Galuminum Foil Studios is Brooklyn to lay down basic tracks for the four full-band tracks: Bob Dylan’s “Forever Young” and “Mr. Tambourine Man,” Simon & Garfunkle’s “The Only Living Boy In New York,” and The Muppets’ “Rainbow Connection.” (You can watch the first in a series of “Making ‘Forever Young’ videos below). This Sunday, Misty Boyce, Jamie Leonhart and Casey Shea will help me lay down “Golden Slumbers,” “Morning Has Broken,” and “Amazing Grace.”

As you can tell, these aren’t just “Kid’s Songs For Kids Of All Ages,” they’re great, timeless (though, not surprisingly, largely dating to my childhood) moving songs about life and youth. As ordered, they track the arc of the day, from waking (“Morning Has Broken”) to slumber (“Moon River”). And what an amazing slate of collaborators! Each one was chosen for their awesomeness, and their relevance to the song. I can’t wait to hear what we come up with!

Per Gil’s advice, I’m endeavoring to bag everyone’s parts well prior to Abbi’s due date (June 9). I’ll mix and master everything in my (no doubt) copious free time this summer. The current plan is to release at an all-star, charity affair at Rockwood Music Hall (where, of course, Abbi and I met) on/around our third wedding anniversary (October 6). (It’s all connected.)

Of course, my not-so-secret objective is to play these recordings to Baby Wagner as they progress from rough tracks to finished songs and as he/she progresses in the womb (I’ve already been singing them acapella for weeks). Hopefully, we’ll bring Baby Wagner to the release show. And hopefully, these songs will help his/her little neural pathways develop, and maybe even come to mean something to him/her someday.

Either way, as “Crash Site” marked my reckoning with my childhood, or “The Invention Of Everything Else” reflected my passage into marital bliss, “Forever Young” will mark this new chapter in my — scratch that — in our lives.