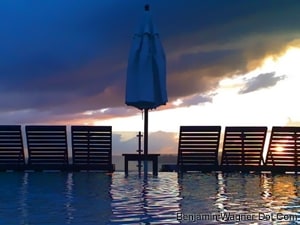 Were Mr. Keane to illustrate Abbi and my week in the Domincan Republic, he wouldn’t need to use much ink.

Casa Colonial provided VIP treatment from the start, ushering us through customs, into a waiting van, and straight to our room. Suite Six (or Doña Rosa, so named for the owner), was a five-room affair: living room, dining room, bedroom, bathroom, spa. Everything was sparse, crisp, and local, from the sculpture on the living room table to the mini-fridge full of El Presidente Cerveza.

After sleeping off my “Hope For Haiti” hangover on the beach, we settled into a lazy routine: a few minutes in the gym, two-hour breakfast on the veranda, afternoons reading on the beach, sunset on the rooftop pool (virgin piña coladas for her, Casa Colonial’s special “Four Diamonds” for him), dinner in the room, rest, and repeat.

Playa Dorado is a complex of resorts just south a Puerto Plata, a sleepy port on the north-central coast. The beach is average, its waters mudded from dredged sand and shored choked licenced hucksters — cigars, sarongs, bandanas, sunglasses, you name it — hocking their wares on European and Canadian package tourists. It would be largely skippable were it not for our impecable little boutique hotel.

We did break out beyond the wire a few times, once to scuba dive (and snorkel) in nearby Sousa (beautiful little cove besought be the same uncomfortable capitalist impulses; beach chair rentals were one hundred pesos a day and the visibility was for naught), and once for a long run to El Fuerte de San Filipe.

Mostly, though, Abbi and I just spent our time together, taking walks, making plans, debating baby names, and generally relishing a few days of relative tranquility. It was about all we could have hoped for, plus eighty degree weather. 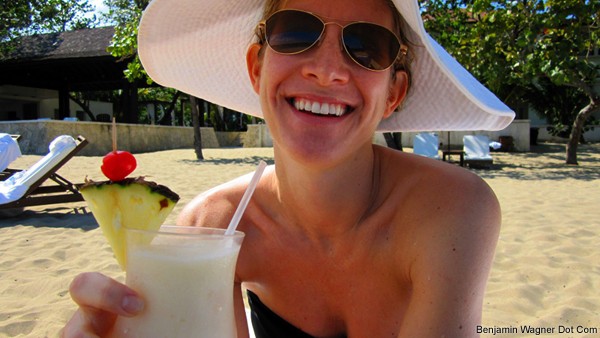