“Hope For Haiti Now” Behind The Scenes 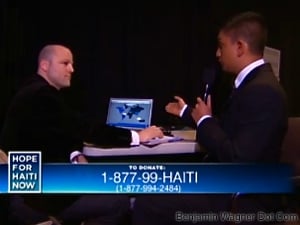 Some twenty-four hours after its original airing, and some 150 miles from the earthquake’s actual epicenter, I finally watched the “Hope For Haiti Now” telethon.

Like most of these sorts of live productions, it’s rare that I actually see the event itself.

Friday night, I was at Kaufman Astoria Studios in Queens, one of four locations for this ambitious, last-minute, charitable broadcast. MTV News was conducting interviews in New York, Los Angeles and London, then serving them unbugged, unflagged and unbranded to the world’s press.

From Madonna’s arrival, to her on-stage, off-camera conversation with Bruce Springsteen, and from Wyclef’s rehearsal to Sting’s backstage interview, I saw and heard the action around me through doorways, monitors, and out of the corner of my eye. With one notable exception.

My boss (creator of MTV’s Choose Or Lose) ushered President Bill Clinton into our awed and instantly-silent backstage an hour prior to showtime. There were easily fifteen of us — cameramen, audio technicians, production management, producers, writers — jammed into a 10×15 foot canary-yellow office-turned-studio. I was tucked into a small anteroom monitoring our Twitter Map. I snuck a peek, then focussed on my work as President Clinton eloquently dashed off a half-dozen questions.

Afterwards, my boss suggested a photo. As a small group of three or four of my colleagues assembled around The President, he called my name. Shocked, I dashed off my headset and strode on set. Seconds after the camera flashed, President Clinton patted me on the back and said, “Thanks for what you’re doin’ here.” I stuck out my hand, shook his and said, “Thank you, Mr. President.”

It took me nearly an hour to regain my composure.

Regain my composure I did, though; I had to. MTV News was live after the telethon, recapping highlights, proffering live interviews, backstage reports and (this is where I came in) global micromedia analysis. Once again (like the 2009 VMAs), MTV teamed with Twitter to avail a real-time snapshot of activity around a specific topic. For three hours, then, I watched the map ripple with Twitter activity. Darker colors indicated greater activity. Brazil, for example, was Tweeting about Haiti at a rate of some 3000 Tweets a minute. Yellow dots indicated specific Tweets my colleagues in Los Angeles had pre-vetted. The editorial conceit was that from Australia to Zimbabwe, international sentiment was with the Haitian people.

Seconds prior to air, I had a set of inspiring international Tweets in place. From Uraguay, EllenFader said, “Haiti, we pray for you.” On the other side of the world in the Phillipines, AnnaSofia Tweeted, “Haiti needs our help. Haiti needs our hope.” I spotted MTV News’ Tim Kash approaching in my monitor, then heard him down the hall. Deep breath. Another. He’s in the room now when the Twitter map goes blank, my perfect examples of world peace disappeared.

I woke up on the northern coast of the Dominican Republic this morning, barely fifteen hours later.

I’m lying in Suite Six (“Doña Rosa”) at Casa Colonial just east of Puerto Plata, and well north of Port-au-Prince. Abbi is asleep next to me, relishing a vacation — a “Babymoon,” if you will — booked some three months prior to Hispaniola’s great and terrible shudder.

Lying here in the glow of the television, it’s easy to feel cynical about these sorts of benefits: millionaire celebrities speechificating, rock stars pontificating. I’m reminded again watching tonight, though, that these sorts of humanitarian, fundraising efforts are what America does best. Forget manufacturing, our primary export is hope. Sure, its cast and scripted and made-up and shot. It’s imperfect, but it works. In just 24-hours, hopeforhaitinow.org has raised nearly $60M, and the resulting recording has already shot to the top of iTunes.

Tonight, I looked out of the window and thought, “That’s the same moon.”

Sounds simple, right? But that’s it, really. We share the same Heavens. And that’s enough.