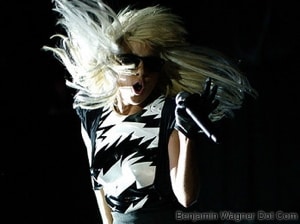 Must’ve been nearly fifteen years ago now that I was wearing green lame and pleather pants, painting my nails cobalt blue, and playing Lower East Side venues like Hotel Galvez, Cafe Sin-e, and Sidewalk Cafe when I first bagged a booking at the coveted Mercury Lounge.

I distinctly recall my first, early-evening slot there is the then-nacent (now defunct) Intel New Music Festival. The sun was low over Houston Street, casting a warm, orange glow on the collection of Lincoln Towncars there. Inside, the room was packed with suits taking in the previous act.

“This is my big break!” I thought.

The second he finished, the room cleared, and the Towncars raced back towards Midtown.

Tonight, I sat in a row full of suits at Lady Gaga’s Radio City Music Hall performance. Of course, there were no actual suits. In fact, I was the only one in a sport coat. Still, Barbara Walters was tapping her toes six seats to my left.

Gaga (né Stefani Germanotta) isn’t really my ball of wax, but I won’t lie: she killed it. I’m not sure I’ve evert seen a more thoroughly-contemporary, 2.0 performance. I can’t imagine her disco-fueled, S&M-inspired, Danceteria-meets-Metropolitan Opera rock show storming any other era. She mashes everything up: Madonna (obvs), Rue Paul, Jerry Lee Lewis, Victoria’s Secret, Rocky Horror, Betty Page, Robert Mapplethorpe, Hermann Rorschach, German SS. You just don’t know what she’s going to do next, and you can’t wait to find out.

She spent inordinate amounts of time talking, at one point lying on the stage begging for applause. “I’m like Tinkerbell,” she said. “I’ll die if you don’t clap.”

Just prior to her strobe-lit, Jumbotron performance of “The Fame,” she reminisced about her early performances on the Lower East Side. “I used to play these small clubs on that smelled like urine,” she growled. “I miss it every day.” The audience cheered, though I doubt anyone in the historic music hall believed her; it may just be a matter of a few blocks, but Radio City is light years away from Mercury Lounge.

As I surveyed Radio City’s throbbing, mobile phone-lit audience somewhere in the middle of her closing trifecta of “Poker Face,” “Paparazzi” and “Bad Romance,” it dawned on me: Gaga doesn’t just harness the power of her fans (her “Little Monsters”). She thrives on the gaze: theirs, ours, and everyone else’s. Where other’s have suffered from the “They’re Just Like Us” nature of modern paparazzi culture (“The Gaze,” as we called it in college), Gaga seeks it, she’s turned it around, seizes its power. She is desperately needy and fiercely independent in equal turn.

“I’m your biggest fan,” she sings. “I’ll follow you until you love me.”

I flashed back to that empty room in the Lower East Side. And I thought about the next 72 hours: Springsteen’s “Hope For Haiti Now” rehearsals tomorrow; Abbi and my ultrasound, the telethon, MTV News’ after-show (during which — get this — I’m slated to appear) on Friday; and Babymooning with my beautiful wife on Saturday afternoon.

I slipped out between the suits, and walked home past the pay phone from which I called my mother years ago to tell her I’d just gotten a job interview (but not, as you know now, the job) at Rolling Stone listening to Rufus Wainwright’s “Beautiful Child” full-tilt on my iPod and… and… and I thought about those Towncars, and those gigs, and those cameras, and I though, “Wow.”

These days are a mash up for me too: Broadway, Houston and Hollywood; fatherhood, faith and terror; sport coats, jeans and Converse All-Stars.

Those pleather pants never did suit me anyway.