So This Is The New Year 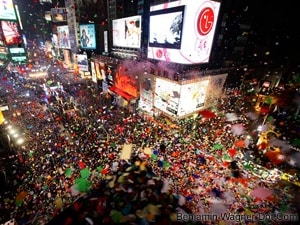 Well, this is a first.

After a quick circuit in the gym (my wife, orthopedist and physical therapist all tell me I need to a) build muscle while b) allowing my body to recover from last year’s two marathons), I went for a short run through the city.

It was, not surprisingly (if you know me), a themed run. And the theme was (not surprisingly), New Year’s Day. My playlist was programmed accordingly (Ian Axel’s “This Is The New Year,” Semisonic’s “This’ll Be My Year,” U2’s “New Year’s Day (USA Remix),” etc etc), as was my route (south along Broadway through Times Square back through time to the Flatiron Building, etc).

Last night’s revelry (a handful of fon youngsters at Abbi’s sister’s apartment) was festive enough, but ended early on account of Abbi’s (reasonable) exhaustion. We stepped out of our cab just as the fireworks began exploding over Midtown. Abbi retired immediately, while I watched Fergie, Justin Bieber et all ring on the new year. It was underwhelming.

As I ran on through the quiet city streets this morning, I still felt underwhelmed. “So this is the new year,” I thought. “But I feel exactly the same.”

There’s always something disappointing about New Year’s Day. Nothing’s every any different. It’s cold, and dark, and one tends to be hung over. Worse, the holidays are over, and you’re staring down the icy-cold, gunmetal barrel of winter.

Somewhere between Times and Herald Squares, a few lyrics popped into my head:

Most of my songs were born of such moments, so I took notice, turning the words over in my head so I’d remember them. Back home five miles later (I ran just over seven miles in about fifty-eight minutes), I picked up my guitar, and found a few chords.

Now that’s a song worth writing.