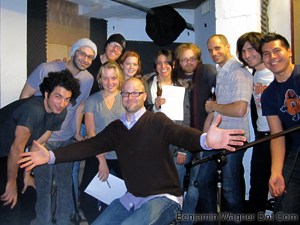 Twelve hours from now, “A Holiday Benefit, Vol. 3” will be in full swing at Pianos! Which is a good thing; I don’t think I have the energy to do yesterday over.

I tucked all sorts of small tasks into my already busy day at The MTV: gathering 826NYC materials, a final email to all of the performers, lyric sheets for our big finale (“Christmas Is The Time To Say I Love You,” what else?).

At 7:45, I raced straight from work to Sirius Radio headquarters there across from Radio City Music Hall. I spent about fifteen minutes on air with Father Dave and the Busted Halo Radio Show crew talking about the record, the rock show (and how Mister Rogers inspired it).

At the same time, the interview I taped with my pal Ralphie Aversa was soaring through in the radio waves between Scranton and Providence. Have a listen here:

I hailed a cab to the L, then raced under the river and down North 6th Street to to rehearsal in Williamsburg. Crystal Ponzio and Emily Easterly were harmonizing on the hallway floor. Inside, Tony (who’s done a terrific job pulling together all of the performers) was at the tail end of three days of rehearsals. Casey Shea, Chris Kuffner, Ryan Vaughn, Jamie Alegre, Chris Abad, Misty Boyce and Bryan Dunn were packed into the tiny space, running through Casey’s terrific (and hilarious) a capella cover of “The Chipmunk Song (Christmas Don’t Be Late).” Holiday cheer was in the air. Everyone was laughing and smiling and having a great time (as you can see below).

We rehearsed the group track twice (check it out below), then Chris Abad’s set, then mine. And then went next door for beers, hot dogs, and skeeball. Tony (bless his heart) drove us all home, laughing all the way.

And so it is! My new tie (red plaid!) is laid out on the bed. CDs is mustered by the door. Tonight’s the night: “A Holiday Benefit, Vol. 3” Release Party at Pianos.

Can’t make the show? Download “A Holiday Benefit, Vol. 3” on iTunes now. And it’s not too late to bid on our silent auction. Remember: all proceeds benefit 826NYC!