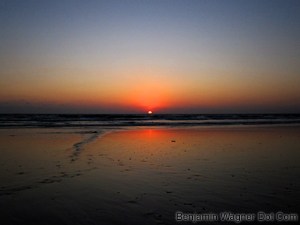 The American Airlines Admiral’s Club is actually kinda’ rockin’ right now. I’m gonna’ put occupancy at 74%. And I’m also gonna’ bet half of those are on my midnight red eye.

A guy in a brown sweater and wire-framed glasses just ladelled some Ranch Dressing onto a plastic cup of carrots and celery. A woman in a black Ed Hardy wife beater stepped to the bar. And the fella’ next to me just emptied his mini-magnum of champagne. Me, I’m tearing through a Sam Adams; all the better for sleeping, you see.

And so concludes another thirty-six hours in Los Angeles.

Highlights? Running 10k on the beach at sunset, dinner with my buddy James, and MTV News’ first-ever high-def live stream (which director James Cameron described as “a blast!”).

And yet, despite the sparkling Pacific bracketed by the dusty, dusky mountains, it’s a great, cement basin. The only way to appreciate Los Angeles is at night from above; everywhere looks beautiful when reduced to points of light in a sea of black ink.
Listen to me, waxing poetic at the eleventh hour. What do I know? What’s left to say after a few dozen of these trips? Anyway, I’m jet lagged, and bleary-eyed from staring at this computer monitor.

Still, I’ll fall asleep here, wake up there astounded for the umteenth at the wonder of it all: 2461 miles while I sleep. It’s a miracle, when you get right down to it. It’s a movie script ending.

So Goodnight, L.A. I’ll meet you when I get there.