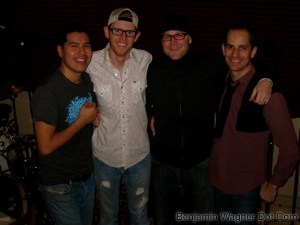 There’s a chance I may be getting overly confident in our collective abilities, but we always seem to pull it off.

I’ve only been in the studio twice this year, in both cases recording cover songs for compilations albums. In May, the guys and I covered The Nadas’ “Feel Like Home” for the band’s fifteenth anniversary “Crystalline” album.

Yesterday, Chris, Tony, Ryan and I repaired to Serious Business Studios once again, this time to track our “A Holiday Benefit, Vol. 3” contributions: Chris was tracking The Ramones’ “Merry Christmas (I Don’t Want To Fight Tonight),” and I was tackling Charles Brown’s (by way of Bruce Sprinsteen) “Merry Christmas, Baby” with an assist from singer/songwriter Emily Zuzik.

Now, I’ve performed “Merry Christmas, Baby” at our annual “A Holiday Benefit” release party for two years running. Still — like last time — I walked into Travis Harrison’s Spring Street studio with nary an inkling of how the tune would work out differently from the original, only a bold confidence in our collective ability to find a new way through it. I had two guiding principles: 1) Drop the frilly Springsteen intro and 2) Don’t sound like a bad John Mayer/Bonnie Raitt duet.

See, the blues has never been my thing. Not that I don’t get them from time to time (in fact, this whole operation was launched in an effort to counter my annual bout with shorter, darker, busier days), but — as a form — it’s never done much for me. I mean, I appreciate its role in the birth of rock ‘n roll, and I’m all for simplicity (see also: my entire iTunes catalogue) the apparent simplicity of the form anchoring a wide swath of innovation and emotion, but, well, save for “I Just Wanna Make Love To You,” the blues as a genre doesn’t make much time on my playlists.

My love for the “A Very Special Christmas” albums and my brother and my egg nog and pot-fueled slow rides through luminaria-stewn neighborhoods of my youth, though, play heavily in my inspiration for “A Holiday Benefit.” I launched the series with U2’s “Christmas (Baby Please Come Home),” so it seemed only fitting to take a stab at “Merry Christmas, Baby.” They’re the twin pillars of my rock n’ roll Christmas past, present and future. Still, I didn’t want another pedestrian ride down a familiar, FM-friendly suburban street.

Cue The Big Muff. Some two hours of level testing and sound checking our a rather vanilla version, Tony ran his bass through this classic pedal, “the distortion that Hendrix and Santana, up to the top contemporary guitarists and rock legends, rely on for its rich, creamy, violin-like sustain.” The affect was transformative, like a shot of much-needed adrenaline.

Tony dug into his part, inspiring Ryan to hit harder, while Chris went further afield explored his electric guitar sounds. We ran the song over and over, each time getting further and further away from anything bluesy, or Christmasy. Chris, drowned out by the fuzz of Tony’s bass, had taken to the piano, then removed himself from the big room altogether to strum and acoustic. Suddenly — maddened, perhaps by three hours of the same three chords — Ryan warned, “Let’s not try and make it something it isn’t.”

The clock was ticking. Afternoon was calling, Emily was due to pitch in vocals, and we were hungry. We’d explored a full range of ideas, and with all of them spread out before us like so many Choose Your Own Adventure options, were at an impasse.

I stood there in the door frame of the iso booth looking out at the guys. Much as I count on the guys’ collective expertise, no one was going to make the call; it was my song. So I called a compromise: Full-Muff in the intro and bridge framing more-traditional, angular verses. We kept the second take.

The heavy lifting was over. Chris tracked a two-finger piano part and Ryan laid down sleigh bells while I ran out for Lombardi’s Pizza and beer. We kicked back to talk rock, trash, and Twilight (Travis just played two dates on the film’s much-hyped mall tour. I banged out my vocal (my best James Brown, really) in one pass. Zuzik showed up and nailed hers in three (remarkable given how far I’d pushed the song’s lyrics and phrasing).

It’s tough to top The Big Muff. It sounds like a dozen, melodic jet engines. Still, there was a solo to be had. “Plug that shit in,” Travis instructed Chris of his Stratocaster. “Let’s make some ‘Revolution’ sounds.” What emerged from the monitors was a glorious, gut-busting, guttural buzz. We were roaring with excitement. Chris bagged his ragged, solo so authoritatively that we slapped him on the intro as well.

A light drizzle fell on Soho as our raucous, rock ‘n roll Christmas train steamed on into the night, and Chris and the guys tackled their luminous, shimmering version “Merry Christmas (I Don’t Want To Fight Tonight).” For all the cheer and spirit, though, we might as well have been packed into that old wood-paneled Cutlass Cruiser driving through Devon, Pennsylvania, and singing at the top of our lungs.