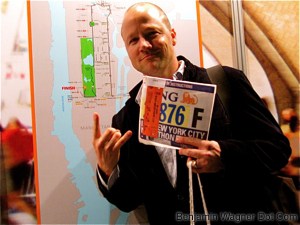 If I could run the marathon right this second, I would.

Sunday marks my tenth New York City Marathon in a row (and my eleventh overall). For the last four years, I’ve run with Abbi. I love running with her (though I’m not sure she’d always say the same about me). Our pace is governed by the collective; if she’s wiped, I slow down and vice versa (and trust me, it’s gone both ways).

In January, I ran the Miami Marathon in 4:08:04 with nearly no preparation just two months after last year’s New York City Marathon.

In the intervening months, I’ve endured twice-weekly physical therapy where I learned about my L4 and piriformis, and even begun lifting some weights. I’ve run some 600 miles, peaking in August at roughly 30 miles-a-week. I ran to Coney Island, I ran to Rockaway Beach, and I’ve traversed four of the five boroughs in one fell-swoop three times, including one four-hour, twenty-four mile Sunday morning.

In addition to exploring entire swaths of New York City unknown to me prior, and witnessing dozens of breathtaking urban sunrises, this year’s long runs have kept me sane and focused amidst constant pressure and change.

This morning, I turned from the river towards home and thought, “I wish I could keep running.”

I am rarely happier than when I’m out in the city, finding my way to its edges, bounding over its bridges, taking it in at the perfect pace. I think I’m at my best in those moments: imagining a distant route, then pushing farther still, always forward, never stopping…