This Is It (This Is Really Happening) 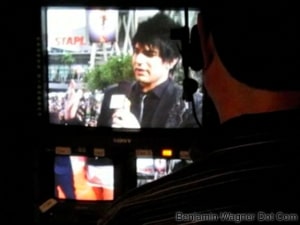 All the way from JFK to LAX (the part I was awake, anyway), all I could hear was the voice of Ryan Adams screaming in my ears.

My brain was on the right lyric, but the alt-country singer/songwriter’s seminal 2003 single, “This Is It,” was the wrong track. This week, anyway, Michael Jackson owns the phrase. Hence my 5,922-mile, 34-hour trip to the red carpet premiere of “Michael Jackson: This Is It.”

You’ve read my musings on life within (behind, really) the fish-eyed lens before. The deeper (or higher, I guess) I get into my job, though, the more challenging the assignment; the more I know, the more I know I’m responsible for.

Landing in Los Angeles, then, was unsettling feeling, like a bullet staring down the barrel of a gun waiting for the hammer to fall. Worse (perhaps) still, I knew it would slam down at exactly 5:30 Pacific Time when MTV’s air yielded to our tiny little production truck perched high atop the Staples Center parking lot.

I arrived in time for a tour of the carpet, and elaborate, u-shaped dance floor with a limo drop at one end, a massive stage at the other, and fan risers, chandeliers and suspended dancer in-between. The wind whipped through the glass, concrete and stone courtyard, blowing leaves, toppling signage, and rattling the chandeliers.

“Michael’s spirit is unsettled,” someone said.

Our job was to produce a thirty-minute (twenty-two with commercials) red carpet special. In other words, to fill four segments of live television with compelling interviews, packages (pre-edited, v.o.-driven stories), and visual context (wide shots, etc). More specifically, our job is to retain (or grow) the rating of the lead-in show, and keep (or grow) that audience through that half-hour.

Live television is a terrific abstraction. It’s like constructing a three-dimensional, non-linear, puzzle atop a relentlessly forward-moving, pitch-black train — with a few million people watching. Like some space-aged bug, you have a dozens of eyes on the action, but you’re completely removed.

The variables are numerous, especially when we we’re guests on the carpet (unlike the Movie Awards or VMAs). Will celebrities show up? A-list? B-list? Worse? Which will agree to be interviewed? Who will we slot where? How will our segments play?

Then there’s timing and bugging everything and identifying everyone in real-time. Complicating matters, this carpet opened at 4:15PT, though we didn’t go live until 5:30PT. So we taped interviews for an hour, then rolled them back. In other words, the producers and directors were forced to not only monitor numerous live cameras and elements (chyron, audio, package playback), but taped as well.

Little wonder, then, my stomach was in knots there in the back row of our production truck as the A.D. counted down 3.. 2… 1…

The stars came out: Jennifer Lopez, Ashlee Tisdale, Neil Patrick Harris, Katy Perry, Adam Lambert, Paris Hilton (and, literally the instant our show wrapped, Will Smith). The truck was a madhouse with ten of us packed into twenty-square feet: producers conferring with one another to re-arrange segments then bark those changes to floor producers on the carpet who communicate to talent — all while the director calls the shots for camera men, audio, playback. It’s organized chaos.

MTV News’ “Michael Jackson: This Is It” Premiere Special” went off with just a few hitches, though: no live bug in the A segment, no jib or crane shots, some longish interviews, and some rogue audio. Sway and Tim were terrific. Our segments were well-paced and insightful (especially the moving story of Michael’s Last 24 Hours). We ran long in the top three segments, so were forced to slam out (“Brace yourself,” I emailed my boss, “This is going to be a hard out.”) on the fourth. And it was.

But the upside to live television is that, no matter how unsettling, nausea-inducing, and uncomfortable, it eventually ends. And you clap, and you hug, and maybe share a stiff drink, and then spill back into the night to catch your breath and remind yourself, ‘That really happened.’