Times Are Hard (But No One Seems To Care) 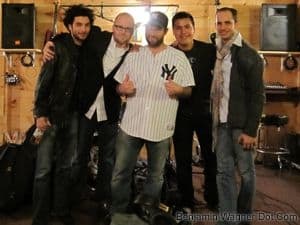 Christmas can demand a lot of a man, even in October.

I swore up and down to Chris, Jamie and Tony that I’d meet them at Galuminum Foil Studios at exactly nine o’clock. At 8:34, I hailed a cab from West 86th Street to 14th and First. At 8:47, I hopped the L to Lorimer Street. At 9:01, I emerged in Brooklyn and began speed walking south.

Somewhere around Stagg Street (just seconds after picking up two six packs at Velez Grocery), my cell phone lit up with a text message from producer Chris Cubeta.

When I finally strode up to the place — a huge, industrial, single-story brick building on a deserted block — I could hear the guys banging out “Christmas Is The Time To Say I Love You.” I wasn’t late after all.

Inside Chris’ massive, wood-panelled space, “A Holiday Benefit, Vol. III” was coming together before my ears. I cracked an El Presidente and joined in.

On our first “Holiday Benefit,”, we tackled my generation’s seminal all-star Christmas jam: “Do They Know It’s Christmas?” For “A Holiday benefit, Vol. II,” we took a stab the generation prior’s: “Happy Xmas (War Is Over).”

We spent weeks debating which song we’d do together this time. The criteria was simple. It has to have verses we can divvy up amongst a dozen singers, and a chorus we can all sing. Ideally, it’s non-denominational, and non-cheesy. All of which rules out most holiday songs. For a second there, we considered tossing out the all-star collaboration altogether.

I clung tightly to the vision, though. Nothing beats the community a dozen musicians into one room. It makes the whole project more meaningful, and requires deeper engagement from the participants.

So I was psyched when I traipsed across Billy Squire’s “Christmas Is The Time To Say I Love You” on YouTube. The song dates to 1981, the year rock ‘n roll really took hold of me. Of course, the video features the original lineup of MTV VJs, connecting me even more deeply to the tune.

I began recording an annual holiday single in 2004 in an effort to distract myself during an otherwise bleak and often depressing season. I launched this whole “A Holiday Benefit” series based on that premise (and the Mister Rogers-inspired urge to help others) two years ago. It creates its own light now. And anyway, the season seems much brighter these days.

Still, these are trying times: two wars, economic turmoil, social inequity, rampant commercialism, and on and on and on. So I had to smile when I sang these lyrics last night.

Nothing breaks the chill of the season like the sound of a dozen voices singing together. Except maybe that sound backed by an iron-clad rhythm section and smokin’ electric guitar.