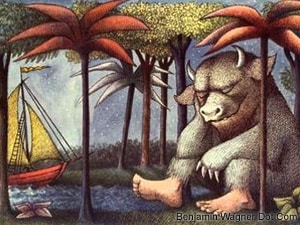 For me, Maurice Sendak’s “Where The Wild Things Are” is mixed up with the wild rumpus of my parent’s divorce.

I don’t remember when Sendak’s creatures first appeared in my life; his fifteen-page book was always present.

I do remember wandering the wide, book-strewn aisles of the Oak Park Mall’s Kracht & Brentano’s with my family (when we were one), pawing at books like “Scruffy” and “Tales Of A Fourth Grade Nothing.” And I remember spotting a Wild Thing there, high on an off-white, corrugated-steel shelf. And I remember that I absolutely had to have him.

He was gray-bearded, bare-footed, floppy-eared and horned. His fur was bright blue, matted and rough, his beard more so. He was a hefty thing, round and solid with big, jointed legs and big, white-felt claws. He appeared beneath the Christmas tree that year, the year of my parent’s divorce. I named him W.T.

That year was especially punctuated by quickly and frequently-shifting emotions: anger, sadness, confusion, joy and hope. I was ten-years-old, somewhere between stuffed animals and too cool. I clung to W.T. like ballast, lugging him everywhere, and tucking him beneath my right arm every night.

W.T., to be clear, was a gift from my mother. The only human characters in the book are, after all, Max and his mother.

The night Max wore his wolf suit and made mischief of one kind or another, his mother called him Wild Thing. And Max said, “I’ll eat you up!” So he was sent to be without eating anything. That very night in Max’s room a forest grew, and grew and grew until his ceiling hung with vines and his walls became the world all around. And an ocean tumbled by with a private boat for Max. And he sailed off through night and day, and in and out of weeks, and almost over a year to where the wild things are.

Once there, of course, Max tames the wild things “with the magic trick of staring into all their yellow eyes without blinking.” He is made king, and commands, “Let the wild rumpus start!” Afterwards, he sends the wild things to bed without supper, finds himself lonely, and wishes “to be where someone loved him best of all.” When Max sails back over the ocean and “into the night of his very own room,” his supper is waiting for him. And it is still hot.

The scant, wildly-illustrated book was just a text then, but it’s loaded with subtext now: run away, be wild; you will always be loved, and supper will always be hot. It was invested with permission to feel excited, scared, angry, confused and brave all at once. Powerful stuff, especially in a house where the walls often rumbled and the floor sometime shook.

Nearly thirty years later, I avoided the itinerant hype of Spike Jonze’s approaching film adaptation for months, endeavoring to see it as a fresh text (albeit invested in nothing less than the emotional chaos of my parent’s divorce). Wednesday night, I sat in the back of an 826NYC benefit screening at The Paris Theater on 58th Street and Fifth Avenue (there in the shadow of Eloise’s Plaza Hotel, a place invested with nothing less than the big city enthusiasm of my mother’s childhood) pregnant with anticipation.

The screenplay (a collaboration between Jonze and 826-founder, author Dave Eggers) immerses us immediately in the latch-key world of Max’s imaginary play. He wrestles his scruffy, gray puppy, then stomps outside to build a snow fort and command an imaginary army. He playfully tosses snowballs at his sister’s boyfriend, who crushes Max’s fort, leaving him a teary, snotty, crumpled mess.

For me, those opening moments — well before we meet his mother (played by Catherine Keener) or the Wild Things — set the narrative tone. Jonze and Eggers have crafted a world, like Sendak before them, that swings wildly between emotions: one minute jubilant, one frightened, the next heartbroken.

As adults, we endeavor to capture childhood in a bottle, frozen forever like some museum diorama where nothing gets broken, and no one gets hurt. Sendak, Jonze and Eggers, though, have the courage to stare into the yellow of our eyes and remind us otherwise. Through the gnashing claws, frenzied dancing and wild rumpus of the dark night, they show us our true selves: messy, complex kids in wolf’s clothing escaping into the oceans of our own imagination, longing for a home where we’re loved most of all.