U2 @ Giants Stadium: Vision Over Visibility 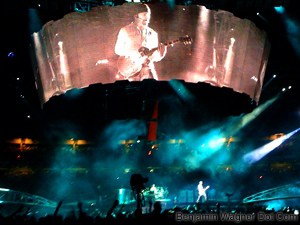 The lights began to dim. The stadium began to rumble. The band’s massive, claw-shaped 360° began to billow smoke. David Bowie’s “Space Oddity” counted down from the outsized speakers: “5… 4… 3… 2…”

One by one, Larry, Adam, Edge and Bono took their positions, then launched headlong into a pulse-racing, soul-shaking block of stadium anthems: “Breath” (which, it so happens, is my ringtone for it’s lyric alone: “Every day I find the courage to / Walk out into the street / With your arms out to the people you meet”), “Get On Your Boots,” “Mysterious Ways,” “Magnificent” and “Elevation.”

The band’s epic, sixteen-story, 360° stage (nicknamed “The Claw” and inspired, according to designer Willie Williams, by LAX International Airport’s Theme Building) crackled, flashed and glowed like some 22d Century alien temple. Bono used ever inch of its circular staging, running and waving, leaping and lunging, shadowboxing and preening for the massive, circular video monitors.

Abbi and I were on the floor of Giant’s Stadium, just below The Claw’s shark skin-gray arch some thirty feet from the edge of the outer ring of the massive stage. If anyone could meet the challenge of transforming a generic colossus into a transformative temple of sound, it was U2. Just fifteen minutes in, I stood awed before their alter of transcendent, epic pop, grinning ear-to-ear singing along at the top of my lungs.

And then God entered the room.

Bono has long said that God enters the room when the band performs “Where The Streets Have No Name.” I’m gonna’ go one further. I’m going to suggest that the band affects unprecedented levels of spiritual uplift with any of The Joshua Tree’s holy trinity: “Where The Streets Have No Name,” “With Or Without You,” and “I Still Haven’t Found What I’m Looking For.” And tonight, we got all three.

Maybe it’s the chortling church organ than floats beneath each. Maybe it’s the epic search intrinsic to the lyric. Perhaps its the song’s legacy, or just nostalgia. Or maybe the band touched something there in the Cold War-era Dublin studio.

Either way, The Edge’s muted and delayed staccato broke the elevated revelry, sending chills through my spine, and tears to my eyes by grounding the band’s jubilation with the challenge of faith: you can climb the highest mountain, you can scale the city walls, but you still won’t find what you’re looking for. It was a tension that band navigated ably and easily all night: moments of outstretched arms and dark despair in equal measure.

And it was precisely what made the show so transcendent. The band understands ebb and flow, minor fall and major lift, waves of regret and waves of joy. They are on the hero’s quest, and we with them, plunging and soaring though thunder and lightning and rainbows and rivers together.

First, Bono floored me with his hushed, nuanced performance of “MLK.” Then, the band delivered a solid, soaring version of “Walk On” (“Love is not an easy thing / The only baggage you can bring / Is all that you can’t leave behind”). Bono sang “Amazing Grace” accompanied only by his beloved, green Gretsch guitar, before leading the band into “One.” And then the pièce de résistance: “Where The Streets Have No Name.”

By “With Or Without You,” it felt as if the band was returning to earth. Once landed, they left us with the new, “Moment Of Surrender,” answering the night’s nagging question.

From the final countdown of “Space Oddity” through “With Or Without Your,” the massive, claw-shaped staging’s ingeniously shape-shifting monitors returned again and again to images of clocks and timers, all ticking down, marking the passage of time, and the approaching… the approaching what?

Liftoff? Perhaps. The end of the world? Maybe. In the final verse, though, Bono reveals: