Pretty Good Shape (For The Shape I’m In) 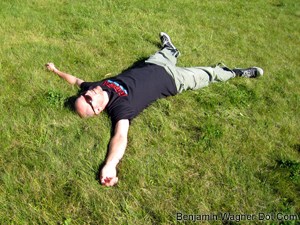 The Abads are a force to be reckoned with.

Example. Last Saturday night, The Abads celebrated Chris’ 31st birthday with a roucous night of Cranium (yes, the board game). I showed up from VMA rehearsals well after one o’clock. The shenanigans didn’t wrap until just before five.

The next morning, Chris send an email to the assembled: “Thanks for the birthday hang; a mellow night with close friends was just what the doctor ordered.”

Still, Abbi and I loaded into Chris and Meg’s borrowed minivan enthusiastically Friday night for a five-hour ride to Andover, Vermont. And when we arrived just after midnight, another “mellow night with close friends” was on like Donkey Kong.

The passtime of choice was Flip Cup, a devastatingly-effective, competitive-drinking relay in which teams compete to chug and then, well, flip a plastic cup from top to bottom. Picture twenty of us on the back porch whooping and hollering in the middle of a star-strewn, forty-degree night. (Actually, you don’t have to; there’s video. Stay tuned for that.) The women routed the men in successive matches until, one-by-one, the revelers slowly disappeared.

My wake-up call came early and painful in the form of my Blackberry alarm. Hangover be damned, I had an interview with Pittsburgh Public Radio’s Saturday Light Brigade. I conducted it there on that same back porch, splashing through spilled beer just a few steps from the still-smoldering fire pit, explaining to host Larry Berger how I’d met Mister Rogers, and come about making the film.

My housemates began to stir as I wrapped my “Making ‘Mister Rogers & Me'” blog post. Before I had a chance to augment my measly three hours of sleep, Abadfest Day Two was upon us. I went for a run, then returned in time for the games: golf, volleyball, Whiffle Ball. It was a day spent running around the backyard like kids (yunno, except with Miller Light).

The air was crisp. The sky was blue. The barbecue was blazing. And, save for a few missed bases, foul balls and broken nails, it was perfect. As night fell, Chris, Tony, Casey and I traded songs in the living room while the kitchen bustled with vegan goodness and a few hands of cards.

After dinner, though, ten days of sleepless VMA nights caught me in their grip. I retreated to my bedroom for a power nap that — despite the din from what I am told was an epic run through The Name Game and a Beyonce-inspired Basement Dance Party — lasted nearly twelve, glorious hours.

In the end, the fun was massive but short lived. I bagged a few more miles (and I don’t care what anyone says; it may only be 1200 feet, but it’s still feels like running at elevation to me), wolfed down a few peanut butter and jelly bagels, and then began to pack. Everyone pitched in to wash sheets, clean bathrooms and generally erase all evidence, posed for a group photo, then loaded their respective vehicles, and pulled slowly and sadly out of the long, gravel driveway.

I’ll say this of Abadfest 2: Electric Boogaloo: It celebrates a good man in the best way; by allowing a hand full of friends the time, space and freedom to forget about life for a while.

In fact, I can’t wait for Abadfest 3: The Revenge. 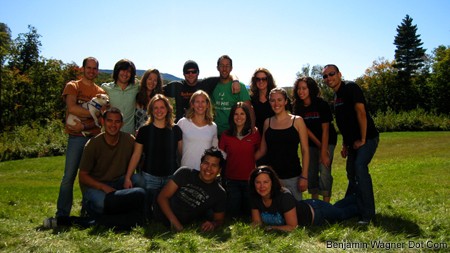