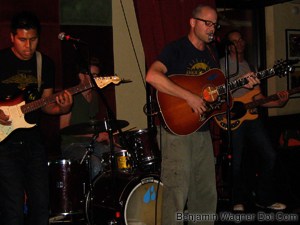 On Saturday afternoon, drummer Ryan’s Vaughn’s girlfriend Kasey’s family vehicle was struck by a drunk driver on South Carolina Interstate 26. Kasey’s father was killed. Her little sister, Allie, was thrown from the vehicle. Her mother, niece and friend sustained minor injuries. The Williams were on their way home to Tennessee after a family vacation in Hilton Head. The drunk driver was later found hours later hiding in some local woods a few dozen feet from the stolen and battered BMW.

I learned of the news via Ryan’s Facebook Status. I remember shaking my head and grimacing, wondering why these random acts of tragedy occur, and trying to imagine the sense of grief Kasey must be managing. It’s unfathomable.

Sunday evening, Ryan sent word that he was pulling together a benefit show on Monday night. I was puzzled at the immediacy of Ryan’s response, and even doubted whether we could make a dent in the Williams’ sure to be enormous medical bills (to say nothing of their grief). Still, I volunteered without hesitation.

Chris, Meg, Abbi and I drove down together, laughing between moments of heading-shaking puzzlement. Why do these things happen? Even as we drove down the West Side Highway, a blue, late-model BMW wove recklessly between lanes leaving behind it a wake of brake lights.

We arrived early and milled about a while. Tony showed up. the Bryan Dunn, Dave Pittenger, Lara Ewen and on and on. There were hugs all around. The production was on-the-fly. “Working stiffs that we are,” I told Dave (who’d stepped up to helm the production) “We gotta be home early.”

By ten o’clock, dozens of Ryan and Kasey’s musician friends: Chris, Tony, Bryan, Dan, Emily Zuzik, Dave, Lara, Jeff Jacobson, Deena Goodman, Brent Shuttleworth, Kailin Garrity, Rachel Platten, Josh Dion, Wes Hutchinson, Martin Rivas, and Jill Stevenson came out. The room was packed as Ryan said a few words. Looking around, it all made sense. This is what we do in joy and grief: we gather, and we make music together.

Ryan took his seat behind the drums. Tony, Chris and I stepped onto the stage having decided just seconds prior (but after an afternoon’s worth of debate) to perform “Dear Elizabeth.” I strapped on my borrowed guitar (it’s strap set for a much shorter man), checked tune (a little sharp), and looked around at the guys.

As the elder, rarely-seen statesman (I’m not even sure I’m a statesman, frankly, though I certainly am old) of what Tony and Ryan call “The Scene,” I felt terrific pressure to deliver a solid performance — meaningful, emotive, substantive and nuanced — even as I struck the first chord (an A, incidentally).

And as I sang the lyrics, it was impossible not to hear them through the editorial lens of the moment: this gathering of community in the face a great adversity. As I approached the last verse, then, I relished the opportunity to share this one, tiny shred of insight so magically and mysteriously deliver unto me on the cold, November night that I wrote “Dear Elizabeth.” I’m not even sure I knew what it meant then. But last night, I felt it to my bones, and hoped against hope that — some 750 miles away in Greenville, South Carolina — Kasey, Allie and Connie Williams could hear me.

“What’s left behind to shoulder grows weightless,” I whispered. “You get used to it.”