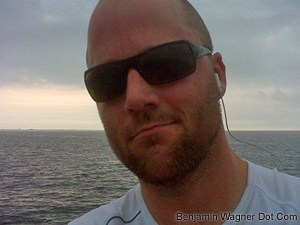 As the crow flies, Coney Island is a mere fourteen miles from Midtown Manhattan. Unfortunately, I am neither a crow, nor do I fly.

Last Monday morning, NY1’s Pat Kiernan forecasted Sunday as a “perfect beach day.” Which is when I hatched my plan to run to Coney Island, meet Abbi there, and spend the afternoon lounging in the sun and exploring Brighton Beach.

I spent all weekend preparing, which is to say, I didn’t do anything at all but sit around carbo-loading and drinking lots of water. I was in bed by nine last night, and up this morning just before five o’clock.

The moment I stepped outside, I knew Pat (or, more likely, his NY1 Meteorological Team) had miscalculated, and I’d picked the lesser of the two weekend mornings; where Saturday morning had been crisp, clear and cool, this morning was damp, cloudy and warm. Nonetheless, I acquired a signal on my GPS watch, pressed play on my iPod, and set out southward.

The City is especially sketchy just before sunrise, and this morning proved no different. Kids staggered drunk from clubs and couples made out on corners, while the homeless crowded every available doorway and vacant bench. In Times Square, handful of Latino teenagers stood in the neon light posturing, flirting and laughing. A single police car oversaw a late-night film shoot. A few blocks further south, a young couple stood in the center of Broadway apparently explaining something to another officer.

The blocks ticked away quickly. Soon enough, I was heading east on Canal towards the Manhattan Bridge. As I crossed, the sun poked through the clouds between blue girders as the subway rumbled past. In Brooklyn, I passed Junior’s and pointed myself up Flatbush Avenue. I smiled as I passed the coffee shop where, some two years ago, I stood with Abbi debating whether we should move, looked back at Manhattan and said, “It’s just so far away!” It didn’t seem very far this morning.

I popped into a corner store and gelled just before Prospect Park, pausing long enough to stretch and Tweet. The sun just over the Brooklyn Public Library, its gold hieroglyphs glowing against the clouds. I passed the Zoo and the Botanical Gardens. Flastbush was silent along the park save for a fleet of tow trucks working overtime. In Prospect Park South, I threaded myself through a family crowding the sidewalk as they wished their teenager at camp. I young mother held her wide-eyed baby. And elderly man in a wheelchair stared as I jogged passed. I felt strong, but alien. They looked at me like Paul Revere or Phidippides, waiting for me to share some alarming news. I just smiled and said hello.

Were it not for my Blackberry, I might have ended up in Sunset Park. I searched and zoomed and studied the map as I ran, though, and soon enough had navigated along Coney Island Boulevard (where I greeted a gathering of elderly Pakistani gentlemen) some twelve miles to Ocean Boulevard. The wide, tree-lined street was inviting and familiar; I’ve run at least a half-dozen Brooklyn Marathons in the opposite direction. I passed yeshivas and temples, young men in yamakas carrying their kittel in a clear plastic pouch, then strayed from the boulevard to the adjoining Gravesend neighborhood. The houses were large, imposing, and seemed deserted.

I was soaked clear through, but felt strong. Before long, I spotted familiar looking apartment buildings ahead, and knew I was close. I crossed the Belt Parkway and descended into Brighton Beach. The tiny, Russian neighborhood was bustling there beneath the F Train subway tracks. Every advert, sign and storefront carried the Slavonic alphabet, except Starbucks.

I turned onto Surf Avenue, then climbed the stairs toward the boardwalk and looked out over the slate-gray Atlantic Ocean grinning. I ran to the base of the Astroland Parachute Jump, then headed out onto Steeplechase Pier to issue my final Tweet: Hell’s Kitchen To Coney Island Run Update: Coney Island 17.02M.

Moments later, I walked into the cool, briney waves to float awhile. Thunder rolled off in the distance. Rain began to fall. It was barely eight thirty in the morning. I slipped into the cool silence beneath the waves while the city and its inhabitants — my neighbors — slowly woke from a dreamless slumber. 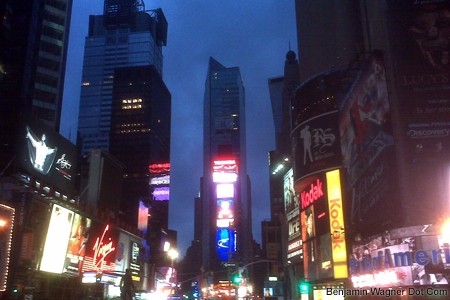 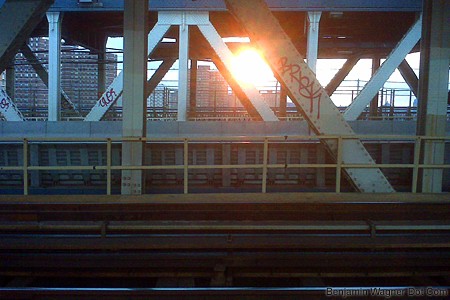 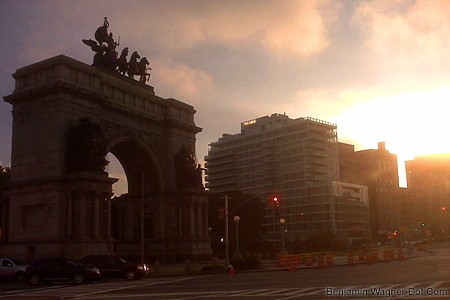 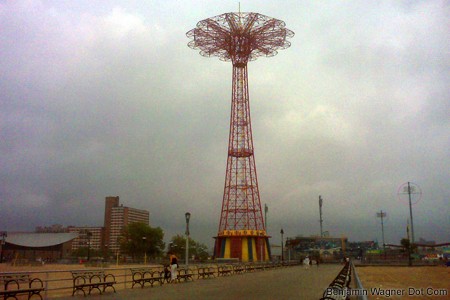 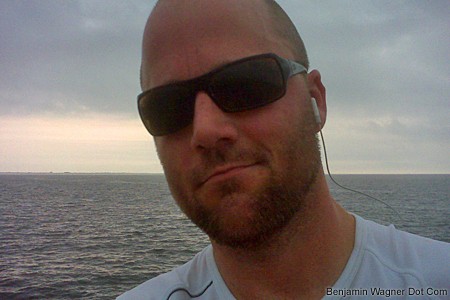