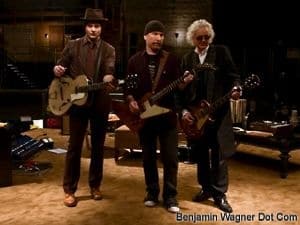 Director Davis Guggenheim’s new documentary love letter to the electric guitar, “It Might Get Loud,” is loaded with unbelievable moments.

First, he manages to shoot Led Zeppelin guitarist Jimmy Page’s visit to Headley Grange, the East Hampshire, England, home studio where the band recorded “Led Zeppelin IV.” Page is regal in his puffy, white shirt and black duster, gliding over the grounds, strumming his mandolin in the garden, and recounting tales of recording John Bonham’s legendary, massive backbeat on “When The Levee Breaks.” He relaxes and opens up for Guggenheim in an unprecedented manner (explained, perhaps, by his Associate Producer credit, but still).

Next, Guggenheim joins U2 guitarist, The Edge, as he retraces his childhood steps through Mount Temple Comprehensive School in Dublin where the fledgling guitarist pulled Larry Mullen, Jr’s “Seeking Musicians” notice off of a school board thereby delivering U2 unto the world. Then he and The Edge pour over early “Joshua Tree” demos in the guitarist’s home studio.

There’s even a cool scene where White Stripe Jack White builds a diddley bow, rudimentary, single-stringed instrument that birthed the slide guitar and figures prominently into the blues. “Who says you need a guitar,” he says, exhaling acrid cigarette smoke.

Guggenheim’s coup de grâce, though, is a moment in the film’s contrived-but-compelling through line: a guitar “summit” featuring Page, Edge and White on a Warner Bros. backlot soundstage. The three disparate players spend some time feeling one another out in conversation, before finally grabbing their guitars and swapping tricks, tips and tunes. In one goose bump-inspiring moment, Page shows Edge and White his “Whole Lotta Love” riff. The corners of White’s mouth — typically reserved for frowns and scowles — turn upward into a wistful, childish grin, while Edge squints his eyes in apparent disbelief, then leans in closer before seconding the progression.

I conducted a brief phone interview with Davis Guggenheim when he premiered his “An Inconvenient Truth” at Sundance. Months later, I called him on his cell phone seconds after he accepted his Oscar for the film. I didn’t mention either today as I ushered him from the Paramount Screening Room to the MTV Newsroom. (Or that I too interviewed The Edge a few years ago, and thought he had small, soft hands.) I did, however, spend our twenty-six floor elevator ride discussing the thread that starts with Led Zeppelin, U2, White Stripes, Green Day and Silversun Pickups: distortion, swagger, and commitment.

And as we stood in the MTV newsroom, though, I couldn’t resist mentioning my own singer/songwriter career, and the resonance I felt hearing one of The Edge’s high school remembrances. Walking through those locker-lined hallways, he says, “One day it dawned on me that it didn’t matter whether we were good with our instruments or not, it just mattered if we believed completely in what we were doing. It was about a total commitment.”

In a post-screening Q&A, Davis suggested that the film, to him, was about exploring the “creative spark.”

“How do you write a song?” he asked. “How do you create something from nothing?”

I may know the answer to those questions, but I may never know what would have happened had I totally committed (or “sold my soul,” as Robert Johnson might say) to rock ‘n roll. Instead, I’ll have to settle for also ran status, an asterisk on an asterisk with a footnote.