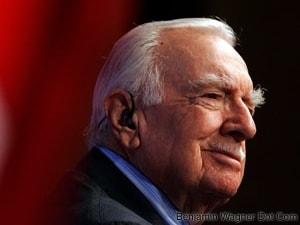 In the fall if 1989, I sat deep within the blue light of Conestoga High School’s dusty, off-white library single-finger typing my Northwestern University application into one of the school’s ten, well-worn IBM PCs.

I don’t remember much about the assignment, or my thesis, or even what made me think I should be a journalism student there to begin with (neither a) “I like to write” b) “I like Chicago” nor c) “My brother wanted to go there but didn’t get in” seemed like reasonable responses), I only remember one thing: Twenty years later, I wish I’d run spellcheck (or invented it so I could have run it).

I do remember writing of Walter Cronkite’s journalistic integrity, his connection with his audience, and understanding of substance over form. I wrote that, as Managing Editor of The Conestoga Spoke, I too aspired to those ideals. My first action as Managing Editor, I explained, had been to change the youthful, hand-penned masthead, to a more stately Old English font, a la The New York Times. My second move was to commission more coverage of international news (despite the fact that the paper was a monthly).

Problem was, I spelled Cronkite with a K, as in “Walter Kronkite.”

As a result (presumably, though my SATs couldn’t have helped), I attended to Syracuse University (everyone’s second choice) and found my way — gratefully, in retrospect — into a dual newspaper/creative writing major. I kept my integrity, my values of substance over form, formed a rock band, toured the Northeast, began making records, graduated, moved to New York City and — eventually — took at job at MTV News.

A dozen or so years later, I met Mr. Cronkite there. He was in his late eighties at the time, moving slowly, but still sharp and spry and quick with a warm smile. I was on hand to snap a few photos, but found a moment to introduce myself and thank him.

“Mr. Cronkite,” I said, “It’s an honor to meet you, sir. My name is Benjamin Wagner. I am the Director of Production for MTV News, and I must tell you that you are the reason that I am here today. You are the reason I am a journalist.”

He held my handshake firm, and fixed his eyes on mine.

“Well, thank you, Benjamin,” he said in That Voice. “Director of Production, huh? At least some good’s come of all this.”

The news of his passing on Friday, then, brought sadness. Cronkite was one of the good ones, delivering the news of the day in simple language and reasoned tones for twenty years from his CBS Evening News anchor chair. But Cronkite also delivered his humanity when necessary: tears for JFK, outrage for LBJ, jubilation for Apollo.

In the hours following his death, Tweets and Status Updates buzzed with snark about “The Death Of Journalism.” True, we lost a bellwether, beacon, and guidepost. And true, the business of news is corrupted by celebrity, sales, and ratings. Let’s not forget, though, Uncle Walter’s turn as host of “You Are There,” “The Twentieth Century” or “It’s News to Me.” Cronkite understood the medium, and strove for it to be its best: compelling, substantive, engaging, connecting and entertaining.