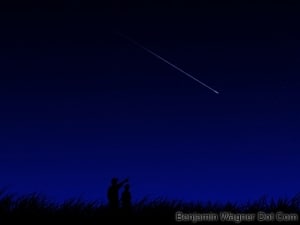 I’m not sure whether my life is more moving, or that I’m more open to being moved. Either way, I choke up pretty easily these days.

A few weeks ago, for example, Abbi and I bought Ethan a grab bag of magic tricks for his sixth birthday. He and Edward sat transfixed, wide-eyed and amazed as I showed them each of the simple slights-of-hand. It was difficult enough to hold back tears of joy as I watched them each pull the new, black-felt top hat over their big, bright eyes, and more so as I walked home with Abbi.

“What could be more important to a kid than magic?” I asked, my voice cracking below the strain of traffic. “I mean, magic is everything! Magic is imagination. Magic is shooting stars and finger paints and fireflies! Magic is believing in the invisible! It’s, like, the most important thing there is!”

My life seems to be full of small, simple moments lately: floating in the river, swimming in the ocean, brunch with friends and laughter with the nephews.

Moreover, these moments occur at the most-unexpected times: on the couch, on the street, in a restaurant.

Which is interesting because, growing up, I would have expected differently.

I’ve written more than once about the play, “Pippin,” in which I played the lead roll way back in 1986. Pippin’s a naive, slightly-spoiled, recently-graduated prince who doesn’t know what he wants to do with his life, but knows it’s gotta be good. “I’ve got to be someone who lives all of his life in superlatives,” he sings. “When you’re extraordinary you gotta do extraordinary things.”

The fact that I’m different is easy to see
So why doesn’t anybody know it but me?
I’m extraordinary
I need to do extraordinary things

Every so often a man has a day
He truly can call his
Well, here I am to seize my day
If someone could just tell where the hell it is

Oh give me my chance, and give me my wings
And don’t make me think about everyday things
They’re unnecessary, to someone who is very
Extraordinary like me

He tries to be a soldier, painter, priest, farmer, and king, but fails, and in the end, he finds himself in love with a widower with a young child. “How do you feel?” she asks at the end of the play. “Trapped, but happy,” he answers.

Try as I might twenty-six later, I can’t help but continue to draw parallels with that darned play. I don’t quite understand what drives it (I suspect it’s more hypomania than hubris), but I can’t help but aspire to, wish for and work towards big things. Like running ten New York City Marathons in a row, or self-producing a documentary, or self-releasing twelve albums. And yet, the moments that bring me the greatest joy, insight are the smallest one. Which brings me to yesterday.

Abbi and I sat through a brief, DVR-fueled American Masters film festival that included three separate documentaries on the lives of Walter Cronkite, Marvin Gaye, Annie Liebowitz, and Garrison Keillor.

Garrison Keillor is one of my deep and simple heros. He’s a terrific storyteller with solid, Midwestern values. I’ve been listening to “A Prairie Home Companion” since I was a kid, and saw him perform live a few years ago. I even asked him to appear in my documentary, “Mister Rogers & Me.” Sadly, he declined.

The film recounts Keillor’s slow rise to Public Broadcasting prominence, including his virgin foray into radio when, after a semester broadcasting on his university station, he discovered that the station’s transmitter had been long-since powered down. Some thirty years, hundreds of broadcasts, a few novels, one Hollywood motion picture later, and — perhaps most importantly — one eight-year-old daughter later, he admits, “I was afraid of living an ordinary life.”