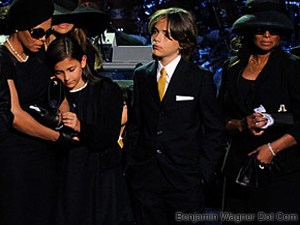 There’s so much to be said about today’s Michael Jackson Memorial. But the chorus of pundits, critics and sycophants is at fever pitch. Three things, then.

It was difficult to take in the once-in-a-lifetime event as a fan or even a regular member of American culture. I was in the back row of the MTV Studios’ control room for our marathon, four-hour live report. In my left ear, I was listening to (and speaking with) Kim Stolz’s floor producer, Jane Mun. In my right ear I was listening to everything else: the executive producer’s calls for breaking news, the chyron operators call for ID, CNN, MSNBC, general studio prattle, quips and comments, and the program itself. Meanwhile, I was feeding as much information to as many of my colleagues as possible (things like, “LAPD calls Michael Jackson memorial “biggest event since 1984 Olympics,” and “FAA has restricted airspace in one-mile radius of Staples Center”). To say nothing of keeping track of Twitter, Facebook, email, BBIM, AIM…

So what I did see and hear — from the moment the helicopters first shot the family at Forest Lawn (“It’s got to be chilling for the family to have 20 helicopters overhead as you’re trying to mourn the passing of a relative,” KTLA’s Asha Blake said as her network shot the mourners from a helicopter) to the “© AEG” at the program’s conclusion — felt like a hastily-assembled, loosely-choreographed and poorly-scripted infomercial on behalf of all those who stand to benefit from a positive shine on Michael Jackson’s Legacy.

Who other than Brooke Shields could possibly have understood Michael Jackson better? Sure, Macaulay Culkin, Emmanuel Lewis and Corey Feldman had been his friends, and had some perspective on the downside to being a child star. But, like Michael, Brooke’s timing was impecable (or unfortunate); star ascended alongside MTV, People Magazine, and Perez Hilton. Like Michael, Brooke’s career traces the hockey-stick graph of Global Celebrity Obsession.

So while she could have turned dark or cynical, Shields honored what was deep and simple in the pop star. Choking back tears, she said read two passages from the book “The Little Prince,” saying that although he was called the King of Pop, he was always a little prince to her.

“Here is my secret,” she quoted from Antoine de Saint-Exupery’s book. “It is very simple: One sees well only with the heart. The essential is invisible to the eyes.” (Mister Rogers loved “The Little Prince.”)

“Michael saw everything with his heart,” she continued. “Today, although our hearts are aching, we need to look up where he is undoubtedly perched in a crescent moon, and we need to smile.”

Later, after the requisite “We Are The World” medley featuring the entire Jackson Clan (yes, Joe was there in the background), Paris Jackson said a heart wrenching goodbye.

“Ever since I was born, Daddy has been the best father you could ever imagine,” the 11-year-old told the thousands of people gathered at Los Angeles’ Staples Center and an estimate one billion television viewers. “I just want to say I love him so much.”

First I thought, ‘What, they didn’t learn with Michael?’ Then I thought, ‘Maybe they’re building evidence for the inevitable Debbie Rowe showdown?’ It even occurred to me that Paris was a plant: After eleven years of shrouded silence, perhaps the family positioned her there at the end of the program’s arch to leave us all with the impression that, despite all of the allegations, Michael Jackson was just a regular ol’ dad.

And then I decided that it didn’t matter; here was a broken-hearted 11-year-old. Here was a little girl who will grow up in the shadow of a terrific, inspired, swirling circus.

Maybe it’s better, then, that we’re all remembered for our better selves: our brightest smiles, our freshest moves, and our most melodic songs. Maybe it’s better to remember with our hearts, not our heads.