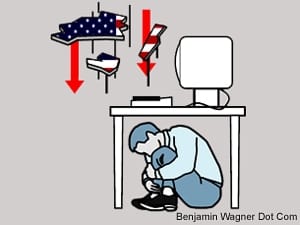 A few months after September 11th, the Department of Homeland Security launched a website called ready.gov.

I found the site (and the entire Department of Homeland Security, for that matter) comical, but also frightening close to home; just two days after watching the towers fall with my own eyes, I scrambled down twenty-nine flights of stairs when my Times Square office building was evacuated following a bomb scare.

Still, I tweaked one of those animated images to reflect my discomfort with the whole post-9/11 tenor and posted it on my homepage for months; our rush to war left me feeling as if the country was collapsing on my head.

Saddam Hussein and his sons must leave Iraq within 48 hours.

The cause of peace requires all free nations to recognize new and undeniable realities. In the 20th century, some chose to appease murderous dictators, whose threats were allowed to grow into genocide and global war. In this century, when evil men plot chemical, biological and nuclear terror, a policy of appeasement could bring destruction of a kind never before seen on this earth.

Unlike Saddam Hussein, we believe the Iraqi people are deserving and capable of human liberty. And when the dictator has departed, they can set an example to all the Middle East of a vital and peaceful and self-governing nation.

The power and appeal of human liberty is felt in every life and every land. And the greatest power of freedom is to overcome hatred and violence, and turn the creative gifts of men and women to the pursuits of peace.

In April, 2005, cracks in our collective facade began to crack when CIA officials conceded that, in fact, neither WMDs nor an Al Qaeda connection were found in Iraq. On Tuesday the U.S. Military began its withdrawal from Iraqi cities.

Meanwhile, some 4321 military servicemen and an estimate 100,000 Iraqis have died, nearly half from improvised explosive devices: car bombs, roadside bombs, and suicide vests — a component of the war that director Kathryn Bigelow addresses head on in her wrenching-but-stellar film, “The Hurt Locker.” From A.O. Scott’s New York Times review:

It is a viscerally exciting, adrenaline-soaked tour de force of suspense and surprise, full of explosions and hectic scenes of combat, but it blows a hole in the condescending assumption that such effects are just empty spectacle or mindless noise. Ms. Bigelow … is one of the few directors for whom action-movie-making and the cinema of ideas are synonymous. You may emerge from “The Hurt Locker” shaken, exhilarated and drained, but you will also be thinking.

Bigelow begins the film with a slightly heavy-handed quote from combat journalist Chris Hedges: “The rush of battle is a potent and often lethal addiction, for war is a drug.” And while “The Hurt Locker” certainly explores the theme through Staff Sergeant William James’ compulsion to plunge head-first (and armor-free) into the face of danger, for me, the film begs an even larger question — one first (or most-articulately) asked in Country Joe & The Fish’s 1968 protest song, “I Feel Like I’m Fixin’ To Die Rag.”

What are we fighting for?

In the final minutes of the film — following what can only be described as an excruciatingly-tense two hours of bullets, bombs, and random, un-glorified, and nearly-palpable violence — James asks his partner, “Why do you think I am the way I am?”

In the next scene, he’s stateside, blankly pushes a shopping cart through a vast, empty, Muzak-themed grocery store. When his wife asks him to get a box cereal and meet her at the checkout, James finds himself lost and overwhelmed in an aisle of colorful, cartoon and celebrity-strewn boxes.

But say what we will about self-governing, human liberty and the creative gifts of men, in the end, we’re not fighting for the right to choose between two parties, we’re fighting for the right to choose between Apple Jacks, Banana Nut Crunch, Corn Flakes, Frosted Flakes, Golden Grahams, Honey Bunches of Oats, Kix, Lucky Charms, Mueslix, Nut ‘n Honey, Raisin Bran, Shredded Wheat, Special K and Wheaties. 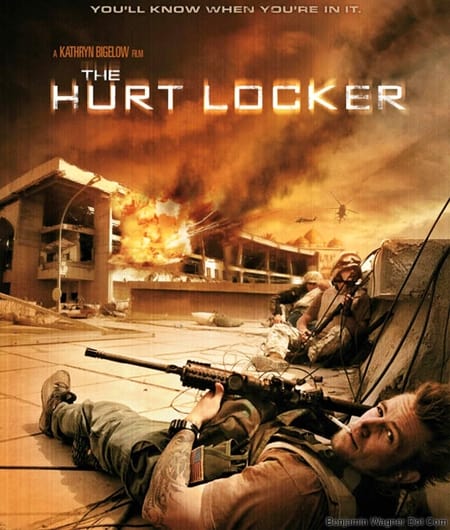