The Hagley Fireworks (Or, In Consideration Of Teflon, Kevlar & The Apollo Space Program) 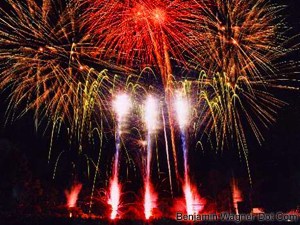 All I knew was that Abbi signed us up for “The Fireworks” back home in Wilmington, Delaware, and that the tailgating started early so I had to catch an early train out of the city and wear nice pants.

“The Fireworks,” it ends up, are an annual tradition at The Hagley Museum in Greenville, Delaware, birthplace of the now-behemoth chemical corporation, DuPont.

Growing up in nearby Valley Forge, Pennsylvania (just thirty miles north on Route 202), the Brandywine was a placid, almost mythic place reserved for revolutionary history (Washington fought the British there), lush gardens (Longwood, Winterthur), fabled artists (Andrew Wyeth). As a kid, I’d often pass through the area on my way to Rehoboth Beach, noting the strip malls, banking giants, and significant amount of DuPont signage, but I knew little of the place or its primary industry until, well, Friday night.

See, there are a few important components to The Hagley Fireworks other than the robust, upscale tailgating.

First, there are numerous set pieces and ground effects (in addition to aerial fireworks) referred to colloquially as “frames.” Second, the event is themed, the fireworks themselves run through a historical narrative. And third (and perhaps most-interestingly), DuPont’s first major innovation was gunpowder.

DuPont was founded in 1802 by E.I. du Pont at the Eleutherian Mills, on the Brandywine Creek, near Wilmington, Delaware, two years after he and his family left France to escape the French Revolution. It began as a manufacturer of gunpowder, and grew quickly. By the mid nineteenth century had become the largest supplier of gunpowder to the United States military.

In the twentieth century, DuPont led the polymer revolution by developing many highly successful materials such as neoprene, nylon, Teflon, Mylar, Kevlar, Nomex, Tyvek and Lycra.

DuPont businesses are organized into the following five categories, known as marketing “platforms”: Electronic and Communication Technologies, Performance Materials, Coatings and Color Technologies, Safety and Protection, and Agriculture and Nutrition.

DuPont’s annual R&D budget is $1.3 billion; its latest project is a research center in Hyderabad, A.P., India scheduled to open in mid-2008, that will focus on agriculture and nutrition products.

The Eleutherian Mills site was declared a National Historic Landmark in 1966 and is now called The Hagley Museum.

There I was Friday night, then, sitting in a lawn chair stuffed full of hors d’oeuvres and beer, watching this year’s Hagley Fireworks extravaganza entitled, “Innovation on the Brandwine.” The production tracked DuPont’s history from black gunpowder to nylon (a fifteen-foot, sparkling leg!) to Teflon and Kevlar (the latter providing protection from the former, of course), and came complete with a rich, baritone voice over and editorially-salient soundtrack (surely the only fireworks show to ever use Semisonic’s “All About Chemistry”).

And while I was absolutely dazzled by the fireworks themselves, I found the history lesson a bit disquieting. I appreciate that someone has to be the chief supplier of gunpowder to American troops. And that, whatever Benjamin Braddock and I think, there’s something to be said for plastics.

On one hand, you have one of the world’s largest suppliers of gunpowder. Think of all the digits, limbs and corpses tallied on account of those Eleutherian Mills (to say nothing of those Teflon-coated bullets and whatever else has been developed in the $1.3B-a-year R&D operation). On the other hand, you have space travel (DuPont was responsible for 21 of the 22-layered Apollo space suit) and bullet proof vests. Which got me thinking about my own job.

I’ve long wrestled my with my company’s primary product: entertainment. Sure, distraction is appreciated in these dark and troubled times, but it seems to me that there are more important things to spend our valuable free time considering than what Michael Jackson means by that glove, why Puck ate the peanut butter, or whether Lauren’s actually angry at Heidi. Iran? Darfur? Global Warming? The Economy?

So maybe it’s not so simple. Maybe corporations — like the individuals who comprise them — are not simply “good” or “bad,” “saints” or “sinners.” Maybe we need to invent gunpowder to invento Teflon to invent no-stick BandAids. Or something like that.

Anyway, my white pants looked fabulous, my Acela Express was right on time, and the fireworks were awesome.