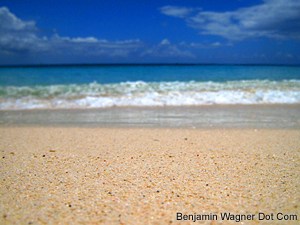 After a week there, I can confidently report that Grand Cayman is as the brochure promises: endless miles of white sand beaches, tranquil, turquoise waters, and limitless sun.

Abbi and I scuba dove eight times, logging nearly five hours at depths of up to one hundred feet at sites like Princess Penny’s Pinnacle, Sand Chute and Tarpon Alley (more on that later).

We walked and ran Seven Mile Beach, snorkeled on Governor’s and Cemetery Reef, and floated, flipped, swam, waded and paddled in the eighty-five degree ocean.

I read four books: Mick Brown’s “Tearing Down the Wall of Sound: The Rise and Fall of Phil Spector,” James Dodson’s “A Son Of The Game,” and Michael Lewis’ “Moneyball” and “Home Game.”

Mostly, though, we spent countless, Blackberry and Timex-free hours reclining beneath the casuarina pines, sipping various coladas, dozing off to the the soothing hiss of the waves on the sand and the wind through the needles, and waiting on each day’s big event: sunset.

In the rare instance that we were awake, alert and otherwise unoccupied, we continued a tradition established in Honduras, and continued in Bonaire, Jamaica, and Maldives: Los Ochos Locos Internacional (Edición Azucar). That’s right: forget poker, bridge or other more complicated, strategy-laden card games; ours is Crazy Eights. In straight sets, I’m pleased to report that our Tortuga Rum-inspired competition was a draw.